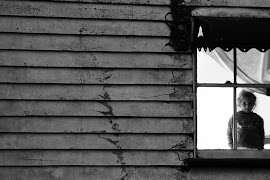 Alice was a small, brown haired girl with two older sisters, one in community college, the other a senior in high school, and a younger brother of five named Miles.

They lived in a geometrically laid-out suburban neighborhood with fenced backyards.

Her father worked as the manager of the appliance section of a large hardware store, and her mother worked four days and one morning a week as a receptionist for a dental office.

Alice was nine. She liked reading, singing in the school choir, had a pet turtle named Francis, played junior soccer and had two best friends, twin sisters, across the alley.

She was an independent child, and her parents gave her a a growing amount of minor responsibilities around the house which she completed efficiently and without complaint.

The jobs gave her a small allowance she spent on jelly bracelets or glass animals.

One late afternoon the first older sister, Elloise, had a call from the second eldest, Lana. Lana said her car had a flat tire, and she needed the jack from the garage. It had accidentally been taken out.

“It’s only a couple miles away,” Elloise told Alice.

“You look after Miles for a few minutes, and I’ll be home soon.”

She put the jack in her backpack, climbed on her bike, and left Alice looking after her as she rode down the street.

Miles was in the den watching a cartoon, but when he heard Elloise leave the house, he wandered out to the backyard to putt a large plastic golf ball about with a puffy, stubby blue golf club.

It was a dull gray day with the residue of the hard winter evident in icy snow ridges under the dense bushes  and mulberry tree in the yard.

Alice took a glass from the cabinet, filled it with grape juice from the refrigerator and was watching her brother batting the ball at an overturned garbage can, when she saw a man in a cap in the alley.

He walked along the back fence of their yard.

The man had a large black gun slung across his body, and it hugged the small of his back.

She watched with alarm as the man passed out of site behind the garage.

She cracked the window and called for Miles to come inside.

“I’m busy,” the small boy said, his back to her as he tried to scoop the ball from the depth of the can.

“Come in now!” she barked in a gruff voice.

“You can’t tell me what to do!” the boy said petulantly, and the ball retrieved, backed away to shoot for the can again.

The man was visible further down the alley looking into yards, his hand wrapped around the strap of the gun.

Alice picked up the phone and dialed 9-1-1 and asked for the police. She returned to the window.

“Police. What is your location?”

Alice recited her address and told the dispatcher a man was in their alley with a gun.

“What kind of gun sweetheart?” the woman asked.

“A big black gun. Like on tv. An uzi.” Alice said, her eyes straying between her brother and the back of the man’s head.

“Alice, where is the man now?”

“He’s going down the alley to Maple Street,” the girl said.

“Alice is your mom or dad there? A grown-up?”

“It’s only me and Miles,” Alice said, and watched the man turn around.

“How old is Miles, Alice?” the woman asked.

Alice watched the man stop beside their back fence to watch Miles chase the ball around, using his small club like a hockey stick.

Miles caught sight of the man and the gun, stopped and stared, the stick slack in his hand.

“He’s outside the yard now,” Alice said and felt her guts tremble . The man was talking to her brother.

She heard her sister open front door, and then Elloise was behind her.

The older girl took in the scene at the window, her young sister on the phone.

“He’s pointing the gun at Miles,” Alice said flatly into the phone.

She heard the man say, “Hey little man,” and watched her brother raise his blue plastic club and point it at the man. The man laughed.

“Miles!” Elloise shouted and skated across the tile floor, down the back stairs and out into the yard. She ran to her brother, scooped him into her arms and ran behind the garage, out of sight of the man.

“I was only playing,” Elloise heard the man call in a high, ragged voice with a hint of humor.

Elloise crouched in the shadow of the garage and clutched the little boy to her chest.

“You don’t need to be afraid of me girl; I’m a protector.”

Alice hung up the phone and watched as the man wandered down the alley the other way, looking over fences, into the now lit kitchen windows of houses as dusk fell.

No police car came until late evening after her parents came home, and Elloise told them the story.

The two police officers, heavily suited up for the night patrol, the adults, Elloise and Lana sat seriously in the living room. Their voices arced in a sing-song of discussion.

Alice heard Elloise crying, and a few minutes later, the police were gone.

That night when the lights were out, Alice crept from her bed.

She crossed the space between them, and crawled into Miles’ smaller bed where he lay on his back, his arms flung wide.

Alice tucked his left arm to his side and lay facing him, breathing in his boyness, and his small heat, felt comfort in the snotty crackle of his breath, and listened to her parents’ murmur on the other side of the wall.