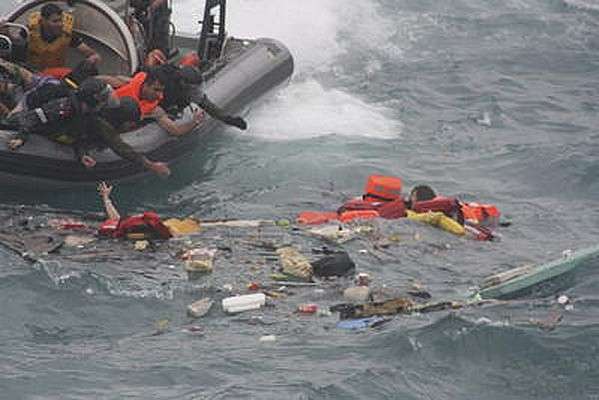 It flummoxes me, why time and time again, people who speak out in support of human rights, people with compromised abilities, animals in need, ethical decisions for the environment, or those in desperate straits, are called bleeding hearts.

Their mindset seems to be dismissed as idealistic, inconsequential or childlike by the powers that be.

That brush-off reminds of the time when as a kid, you made a suggestion to an adult. They patted your head and said, “That’s a lovely thought, dear; but it’s just not realistic.”

So it seems with this recent declaration by Greens senator Sarah Hanson-Young. Hanson-Young was speaking about the recent announcement that the Coalition government plans to invest $4.1 million in a film to deter future asylum seeker potentials.

The film, to be distributed in countries that might produce asylum seekers (they’ve already identified their audience – that kind of speaks volumes in itself),  is intended to replicate the realities of the journey for those considering the decision about making the journey by boat to Australia.

As a side note, they could just save the money and screen the two SBS series of Go Back To Where You Came From, but I suppose that defeats the purpose.

So anyhow, Hanson-Young’s will likely be regarded as a less than serious statement:

“With the brutal conflicts in Syria and Iraq the only message we are sending refugee families caught up in the violence is, ‘Bugger off, Australia does not care about your suffering’,” she said.

“This will do nothing to help improve Australia’s standing in the international community. We should be doing more to help address the refugee crisis by offering safe avenues to Australia, not turning our backs on those in need telling people we don’t care what happens to them.”

The film will be produced by experienced Australian filmmaker Trudi-Ann Tierney, and her production company, Put It Out There Pictures.

I have heard Tierney interviewed on radio, and what I have heard and read says to me, she is a good woman for the job. She created television programs in Kabul for several years and saw the devastation of war.

In a 2011 interview with journalist Sally Jackson of The Australian, Tierney said of her time in Kabul, “I’ve been through six suicide attacks since I’ve been there, three of them very close.

“Everywhere you go, you’ve always got an escape strategy. You’re always working out how you’re either going to get out or hide and it just becomes second nature to you. The attack on the US embassy was incredibly scary because it was happening all around us. It was a prolonged attack for 18 hours. That’s probably the most frightened I’ve been.”

So in some ways, Trudi-Anne has the creds.

The company has posted a public statement in response to the ABC Lateline program’s coverage of the film’s announcement on April 10. I reprint it here in its entirety:

This is about people, not politics. People continue to come to Australia to seek a better and safer life, far too often with tragic consequences. Many of these deaths could have been prevented. Education about the dangers of the trip and the policies that await them if they do reach Australian waters will save people from detention, disappointment and even death.

Film educates and engages like no other medium. It is a powerful and emotional way to explain the complexities of the current policies; the stories it tells moves, connects with its viewers. The impact this film will have on a person’s decision to attempt a journey by boat to Australia cannot be underestimated.

A lot of people do not realise or understand the risks and the realities of coming to Australia by boat. Raising awareness is critical.

First of all, I’ve got to say that the company choice of the word disappointment just does not seem to capture the documented self-harm, hunger strikes, violence and suicides eventuated by those kept in Australian detention centers.

I feel disappointed by Tierney’s decision to be associated with this project. I would have thought in the face of Australia’s rigid asylum seeker policies, that she would realize the depth of desperation in those fleeing persecution, or the promise of death or torture.

I also question the direction of that awareness.

Rather than raising awareness about the potential for danger in sea crossings, which I entirely accept, why do we not raise national awareness about the reality of life in these countries? Find ways to integrate asylum seekers into our lives, welcome them into our shrinking rural and regional communities where we need people so desperately and give them a safe life for themselves and their children? These are human beings, not statistics.

Maybe that’s just too scary. I understand the labor crisis, I understand the resource limitations. But to me, it just shows the limitations of the government’s vision for the future of resource management, farming, water use, climate change preparation and investment in inventive industry. Their current policies seem to reflect their caution.

And why reduce and foreign aid to these countries rent apart by conflict, hatred and extremism? By doing so, there is a cost to weaken the fragile representations of humans left in those countries that are watching the world fall apart around them, for example South Sudan; a country that will soon join many others, feeling the deficit of Australia’s aid.

It leaves those lands more vulnerable to invading extremists like ISIS, or destabilizing forces, and there are no cheap or fruitful answers there.

How can any of us, living free; free to make choices about our own lives in safety, judge that a human will choose the desperation of their lives in a country like Syria over making the dangerous trip that could promise freedom?

I feel this is an arrogant assumption.

I do think people need to know the risks of the life that faces them if they choose to leave home, and how bad are the conditions in launching countries like Malaysia, how dire the consequences of the crossing and the dead-end that is Manus Island or Nauru.

These are intelligent fathers and mothers who love their kids, single adults and orphans. I cannot say how they will digest that film against the background of the man-made travesties and dangers in their lives.

This news, after a week that saw the Coalition government announce cuts to international aid that will impact NGO aid-organizations as well, Tony Abbott and Julie Bishop’s plan to coerce Iran to take back their refugees,  and Abbott thumbing his nose at human rights lawyers’ ambitions to find justice for their clients, I am angry.

The film is meant to realistically portray the journey of asylum seekers to put fear in their hearts so they choose to stay put or go elsewhere. Trouble is, you can never replicate the complications of everyone’s individual story.

It is callous, and hostile. And I am ashamed of this government.

So is Australian senior barrister Julian Burnside. He has launched a campaign to bring both Tony Abbott and former Immigration Minister Scott Morrison to account before the International Criminal Court over their decisions and actions in the government’s asylum seeker policy.

That is one space I intend to keep watching.

-The featured image at the top represents the catastrophic accident on December 15, 2010 when a boat filled with ran into the rocks at Christmas Island.  It was thought the boat could have carried as many as 100 asylum seekers. Most came from Iran and Iraq. The tragedy unfolded before the island residents who were mostly unable to help due to the violent ocean conditions. It was verified that 48 people perished, and 42 survived.