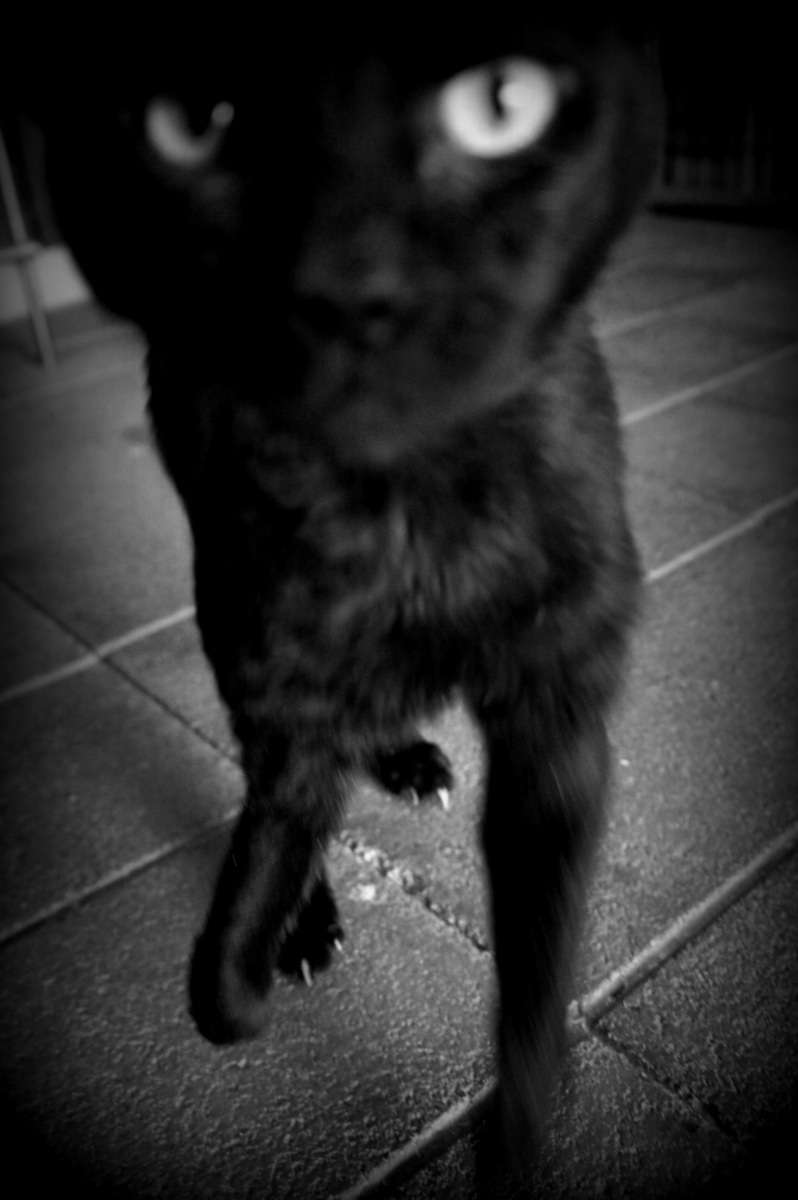 When you first see Feral, your heart melts. It just does. Mine didn’t have a chance.

I wanted to pick him up and take him home with me right then, but like some of the animals that land at Gwydir Park Refuge, he isn’t going anywhere. He is home.

It might be the curled, disfigured paw that snags you, or the impossibility of taking a photo of him from any distance, because when you sit down with him, Feral wants to be right under your chin, purring and rubbing his face against yours.

Pat Carmody and Geoff Johnson own and operate Gwydir Park, a no-kill refuge that rehomes close to 500 animals a year, and has about 100 refugees at any one time. Some of the animals are there to stay because due to age, or their disability, they have a loving home for life. Feral is such a cat.

His story began nowhere with walls. He was born as a feral cat, essentially the descendant of an escapee cat from sometime past that began breeding in the wild. Australia is rife with feral cats in the bush, and they are identified as a problem species because of the impact they have on native birds and animals, many endangered.

Cats are very good at surviving in the wild, and Feral was doing all right. He had a plan.

“That’s the kitten that was wild as a March hare that used to dart in and out of the cattery to get a feed,” Pat recalled.

The young cat disappeared one day, and Pat said they spotted the little black cat at Dumboy, an area a few kilometres east of their property.

“At the creek there. You couldn’t get him,” Geoff remarked.

They stopped the car, and called to him and Pat said for a moment, it looked like the cat might approach her.

“He got about from here to that gate,” she said pointing several metres away, “And then he just bolted back into the scrub and I never saw him again.”

It was about nine or ten months later when a black cat turned up in the yard.

“And he come out again the next night, and I said, ‘He’s injured himself. He’s got a really badly injured front leg.’”

So from that moment, the pair set about trying to catch the cat to get him some critical medical treatment. They tried everything.

“We fed him, set traps to catch him, put his food in it,” Geoff recalled.

“He lived under that house for nearly six months,” Pat said.

“’Cause she fed him every night,” Geoff added.

“I used to feed him, I had water out for him, everything else, but you couldn’t get within coo-ee of him,” Pat said.

Time passed and the cat did not leave, but was still far too skittish to approach. Then one night, something in that little skinny injured cat seemed to gather itself.

“I’m sitting in the lounge room, drinking a cup of coffee and watching TV, and in he marched. Jumped up on me lap!” Pat said, still incredulous.

“And he’s been another six months, living in the house, as a house cat. And he used to just roam around the yard with these dogs and everything else.”

They couldn’t mend Feral’s leg by then. The breakage Geoff believed was down to a car, had long reset itself, and the foreleg and paw are curled like he is trying to hook a ball.

His nails are also unable to retract anymore.

But there was another dramatic chapter in Feral’s tale.

“Here, about ten months ago, there as a giant big ginger feral cat hanging around, and it bashed the living crap out of him,” Pat said.

“Took pieces out of him,” Geoff said.

The attack turned the little cat’s world upside down. Geoff said he began messing in the house, and Pat said Feral was terrified.

It is true that the black cat is entirely satisfied with his space. He spends time in his cage or comes out to visit with the other cats or lie on the cool concrete floor.

“He won’t go out the door if you open the door, either,” Geoff said.

If the cattery door is opened or shut, it doesn’t matter to Feral. He has found his place of security and there, he is serene.

What I love about Feral’s story is the dedication Geoff and Pat felt about looking after the little injured cat, and valuing him despite his wonky leg or legacy of skittishness.

I also feel awed by this very wild, injured cat’s decision to cross the divide between complete freedom and tameness. What must have entered his mind on that night, to walk into that house and participate in the lives of these humans? It is remarkable.

If anything, that leap of faith, by a cat, should cause us to consider how we too often abuse and discard these amazing animals when, if given time, they will meet us more than halfway.