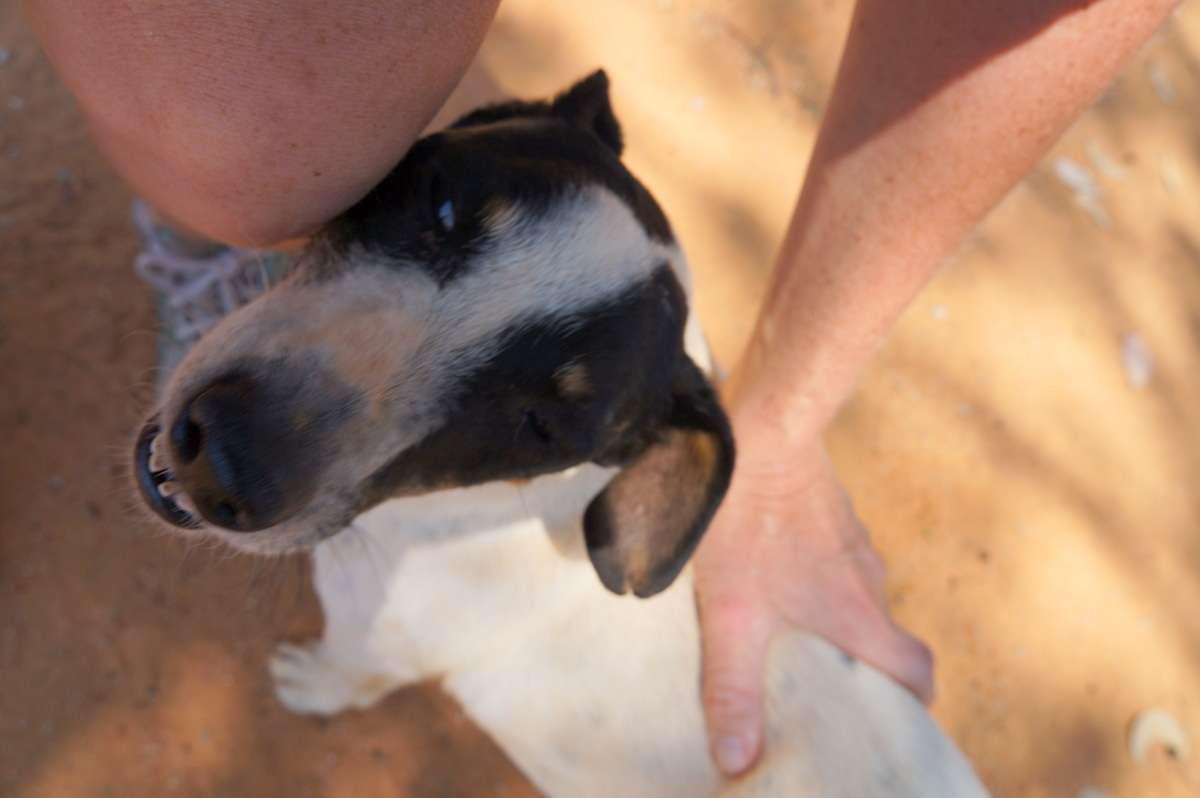 I am not certain what would possess a person to put an animal in a bag and throw it away. It’s not a mindset I think I can ever inhabit, but it happens.

And it happened to Macintyre.

Macintyre is a boisterous, affectionate Jack Russell-cross that lives at Gwydir Park Refuge, and is waiting on a home. He has been with refuge owners Geoff Johnson and Pat Carmody for about three years. The property is a no-kill refuge a with floating average of about 100 refugees at any one time.

Geoff and Pat re-home in the neighborhood of 500 mostly dogs a year to the best homes they can determine, and Macintyre’s person is yet to arrive. Until they do, he has a loving home.

Pat and Geoff subsidize the animals by running a boarding kennel and bathing and grooming dogs. They also receive generous support from both known and anonymous donors who make the life of the Gwydir Park refugees that much brighter.

I tried hard to get a good photo of Macintyre one afternoon, but like so many at Gwydir Park, he is thoroughly incorrigible when it comes to dishing out the love. The larrikin was thrilled when I crouched in his yard, and proceeded to mob me with wags and kisses. I was able to capture him a little, but found myself giggling more than photographing.

He is a darling dog.

“I’ll tell you when we got him; the last flood in Inverell,” Geoff said, starting the story of the small spotted dog.

That year the river was high and flowing with energy. It crept up and flooded the O’Connell Street roundabout at the edge of the Inverell CBD and it was only luck that set the next events in motion for the little dog.

“It was thrown off, in a bag, down at Ring Street Bridge, and a woman saw him and rescued him.”

Pat explained a woman was walking her young dog along the Macintyre River early one morning and saw a car pull up on the bridge. She was nearly upon the bridge when a chaff bag sailed down into the water. Pat said the woman took action.

“Waded in. It landed on the reeds on the side, and she saw it moving and thought, “Oh, a litter of kittens”, and waded in and got it out, and when she got the bag out, Macintyre was in the bag,” Pat finished.

The woman called Geoff and Pat immediately and drove out to the refuge, just as she was.

“And was still dripping wet when she got here,” Pat said and indicated a spot past her waist. “She was wet up to here, from where she’d been in the river. She come straight out here.”

Macintyre had been tied inside a plastic chaff bag with a cable tie, and Pat believed it was that bit of air in the bag that helped to give him a chance.

Geoff said it was a good thing they didn’t get washed away with the river as high as it was.

The pair called him Macintyre because he had been fished from the river, which girdles Inverell.

Macintyre wasn’t a pup when he was tied up in that chaff bag and tossed away like rubbish. Pat said she reckoned the dog was about three years old when he was disposed of.

You could have knocked me over with a feather. “Full grown dog? My god!” I said in disbelief.

“Oh, no,” Geoff said. “People reckon you make these stories up about cruelty. I don’t make them up, I usually take photos.”

They said in a short time, they discovered why Macintyre might have been dumped. Pat said he used to climb fences.

“He climbed fences for the first few weeks he was here, then suddenly he’s stopped and he’s never done it since,” she explained.

“The only things he does wrong here, when a storm comes, he chews his kennel to pieces, because he’s scared of storms,” Geoff said.

I sat for a moment and imagined the moment that zip tie was tightened, and the little dog terrified inside, not knowing what could happen next. Flying through the air and landing, panicked on water.

What if that woman had not been there? What if Macintyre had been tied up in hessian bag or another cloth bag? He would have sunk like a stone.

Macintyre is not the first, nor will he be the last of the animals that end up at Gwydir Park after their disposal.

“Here’s another story. People here from Moree, about 18 months ago, called up in Dumboy here (Dumboy is a location near a creek about five kilometres, or three miles east of Gwydir Park) you know, the road side rest?” Geoff said.

“To put some stuff in the garbage can, opened it up, and here it was, full of little kittens,” Pat said.

Geoff said the couple had a two little dogs who bolted over to the bin and he speculated the dogs must have heard the mewing.

“Just stuffed them in there, in a box,” Geoff said and sighed with frustration.

The kittens had spilled down deep into the bin. Pat said the people were able to get two out, but called up for a carry cage to get the rest. She said it was difficult to get them out since the lid only opens so far, and it is fixed to a post.

I often stop to drop off a bag of household wasted every couple of week, and pass it every day and I can understand how hard it must have been to reach those little kittens.

I wonder about Macintyre’s previous owner. Who is that person is behind the decision to thrust him in a chaff bag, a dog that weighed a good ten pounds, zip tie the top and throw him in a river? Not the person who would drive out to the country and let him go, not turn him in to a vet, give him away, or surrender him to the RSPCA, but the human who decides to stand on a bridge and let the bag fall.

I don’t usually, take an overtly subjective stance in these posts, but when I consider what happened to Macintyre, this bubbly, lovely dog, I think a dog in a bag, that’s not giving that animal any chance to live.

To learn more about Geoff and Pat, click here. You can also read more stories about the Gwydir Park refugees by clicking here.