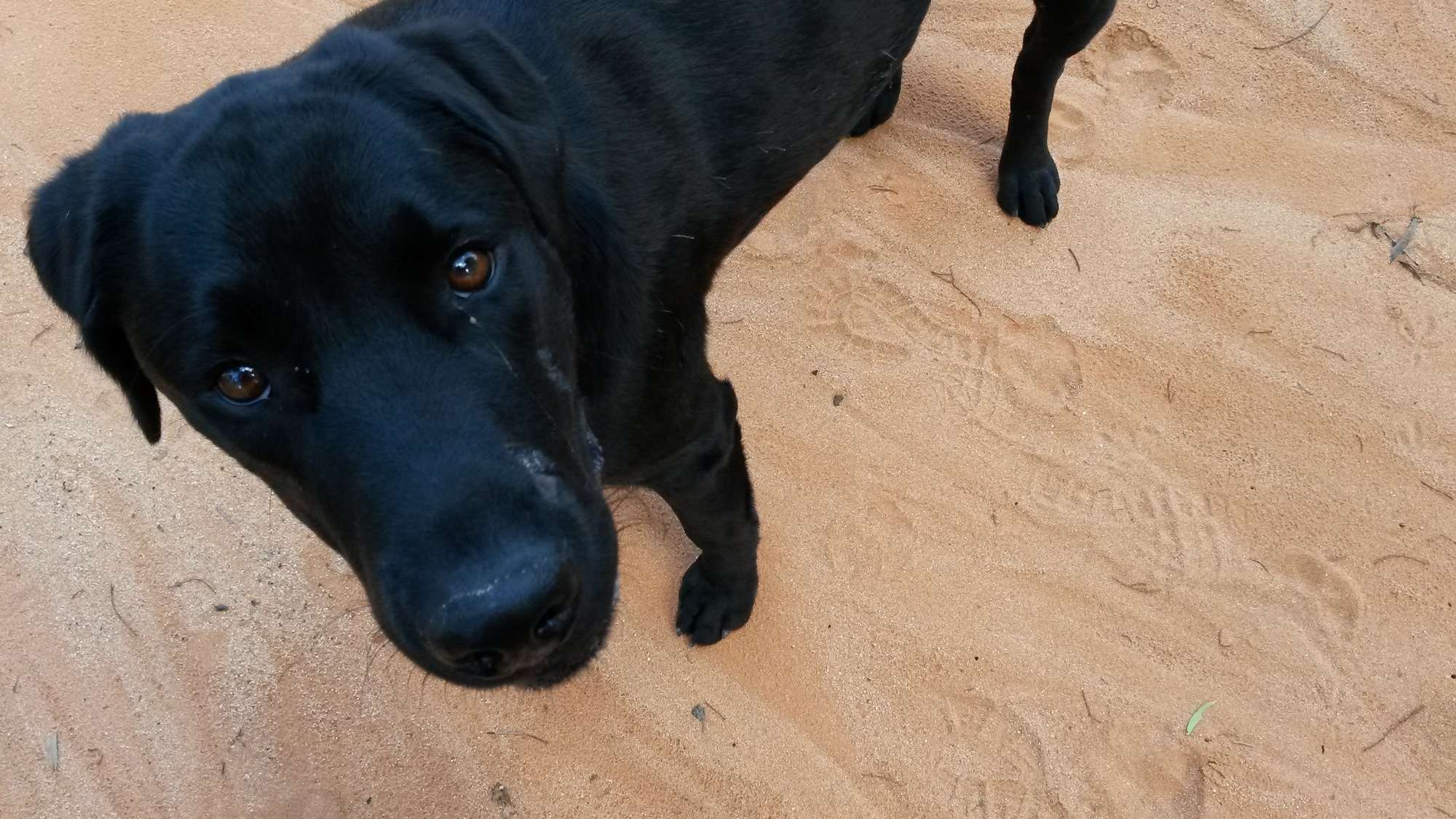 This big, lovely dog, Harvey, came into our lives in late May.  He likes to put his head on my lap, and each night before I turn off my light, he gets up from his bed in my room, and noses his snout into the crook of my arm for a bedtime cuddle.

But life is not easy for Harvey at the moment.

As a result, my husband and I spent the day in Tamworth with the most trusted vet we can find, looking for answers as a result of a terrible accident we knew Harvey had sustained, but none of us guessed would become so serious.

Yes, I am more than a little angry.

Harvey came to the Gwydir Park Refuge on Friday, May 1. He was found on the side of the road, in terrible condition. He seemed to have been hit by a car and had a bad head wound.

The woman who found Harvey phoned the local council, and was told to tie him to a gate and somebody would come by in a few hours to pick him up.

She was mortified at the callous response, so she bundled the dog into her car and took him to Gwydir Park. Geoff Johnson and Pat Carmody immediately set about looking after the gaunt, bloodied dog.

He had a microchip, and pat has a microchip reader. They soon found out the breeder sold or had given the dog to a fellow. Geoff and Pat phoned the breeder because the dog was still registered in his name. They learned he had received a text message from the new owner to let him know he’d shot the dog.

Maybe he didn’t know he missed.

There are few words for that owner, but suffice it to say, outright cruelty is ripe and alive in our world.

It seemed Harvey had been hit by a car and then shot, or shot, run off and was hit by a car. Either way, things were looking poorly for him.

What happened the next day affected what’s happening now.

With the possibility of a gunshot wound, Geoff and Pat acted immediately on the saturday. The couple have received more than one dog into the refuge who has been shot in the head. They took the dog in to a vet in the nearest town to see if he, like a girl who still lives at the refuge, had a bullet in his skull.

The vet took three x-rays, supposedly looked at the films, and seemed to take enough time to at least verify there was no lead in his head.

I saw Harvey a few days after the accident. We were looking for a larger dog to help fortify my confidence living alone on this remote property during the many months my husband is away working. This dog was a good size. but clearly had some time ahead to heal.

I tried to make the black dog sit, but he whimpered and he was clearly in pain in the back end. He struggled to move his body correctly. In the next two weeks under Pat and Geoff’s vigilant care, he put on more and more weight, and was a happy, lolloping Lab-like fellow of about nine months of age.

The photos I took when he first came to the house show him panting , mouth wide, and he was able to grab toys.

Time passed, and I noticed he was able to open his mouth less and less. I can just put my fingers between his front teeth now. He can’t grab for his toys anymore. he clasps them with his small front teeth. His canines cannot part anymore.

So three weeks ago, Harvey was booked in for the big snip, and I asked the other vet clinic to do the job. When I brought him in, I asked that the vets have a look at his mouth in the process. I said I was concerned, owing to the accident, that he might have damage to his jaw.

We were soon phoned and told it was impossible to intubate, an thus, anesthetize Harvey because they could not open his mouth. The vet diagnosed masticatory myositis, an impressively sounding auto-immune disease and prescribed a course of steroids.

He said it was evident from the depressions on his head and a two-week course of steroids would help to determine the diagnosis. It was the cheapest immediate option and we planned to do x-rays in a couple of weeks if there was no change. But both my husband and I were dubious at the diagnosis of this rather cocky young vet.

Harvey was on the steroids for about three days at a reduced dose after a vet we trusted in Victoria who said the dose the local guy recommended would kill him. She said it was unlikely he had the disease.

Within 24 hours, I had contacted Geoff and Pat, asked about those initial x-rays, they gave me the disc of images, and  gave me the names of two vets in Tamworth they trusted after years and years invested with dogs.

I sent the x-rays to one of those vets, and the woman in Victoria.

Though the image was small, both the Tamworth vet and the Victorian vet picked jaw damage immediately. The Victorian vet said she thought from the films that the jaw was crushed.

So the steroids went in the toilet and we made an appointment for Harvey.

It takes two and a half hours to get to Tamworth. I used banked up overtime for the day off to go down.

Harvey was booked in for CT scans, and it took the day. While he went though the process, Ross and I wandered downtown Tamworth, drifting up Peel Street. We had five hours to spend and decided to see a film.

I won’t give the story away, but Michael Caton plays Rex, a lonely cab driver in Broken Hill, diagnosed with late stage, terminal cancer. He latches on to the possibility of ending his life by assisted suicide.

Jacki is the Northern Territory doctor who can make it possible. He leaves behind his neighbor and sometimes lover, Polly played by Ningali for the long trip north.

Along the way, Rex meets Tilly and Julie, and finds value in an otherwise aimless, seemingly empty and terminal life.

The end is sort of predictable as you absorb the plot and the characters. What the film did for me was to fortify we all have choices in life, but in the case of Harvey, he did not have a choice. He was depending upon us to make the right decisions.

When Ross and I walked from the theater to get the car and collect Harvey, I think both of us were hoping the vet would tell us our dog’s problem was a wad of scar tissue causing his jaw to be obstructed.

But nothing is ever that simple. Not in my life, anyhow, Or Harvey’s.

The vet took time to go through the scans with us. In the background, Harvey lay waking up with an oxygen tube superglued to the side of his face so they would be able to anesthetize him safely to take the scans.

The scans revealed great trauma to his jaw which was likely down to the accidents. A bony callous has fused the left side of his jaw though the vet felt it was likely done healing.

It means without intervention to remove bone to make his jaw work again, nothing will change, but his heat regulation, his ability to eat and drink, the inability to ever intubate him through the mouth will be affected.

He said surgery would yield a 60 per cent success rate. He said there is a chance his mouth will not be the same, and there are complications that will travel with that procedure.

I asked if things would have been different if the that first vet, that morning a bit over three months ago had spotted the damage. He said absolutely, it could have been plated, and he would have had normal jaw function today.

Instead, for whatever reason, be it her ignorance, a grudge (that is documented) against her clients that day, that she did not have time, though she had enough to pocket the hundreds she was paid for those three x-rays, any reason, she has and will cost us thousands we can ill-afford, and deliver to this poor, defenseless dog, imminent pain, and a gamble on a brighter future.

And just looking at Harvey’s face, it is clear to see the asymmetry of his head and his mouth. The Tamworth vet took one look at our initial meeting and clocked the deformation. Why did the second local vet not recognize this as an expert in his industry?

I expect much, much more.

I have written about not becoming a vet, and why. But never have I questioned the duty of care we all have when an animal comes to us in emotional, psychological or physical pain. I based my horse training career and the care I have given to every animal in my world upon that tenant.

And yet, I have this big huggable dog who manages to eat and drink through the small window of the front of his mouth. If we can help him to have a better life we will.

There is great disgust in me for those, who are meant to dedicate their lives to the good of the animal, fail because of their ego.

Because the animals are the ones who will always pay.

-The featured image is Harvey on a walk this past Sunday. The clods on the side of his face are the spots of dried superglue that held his oxygen tube secure.

Such a sad story. If this happened to my dog I’d be furious. Hope both Harvey and you have some good times ahead.

I’m very sorry to hear that. I hope that Harvey will be ok. I understand your frustration with vets and have found it very difficult to find one that I trust. I have had so many bad experiences for a range of different pets and have lots a couple to neglect and have saved others by hounding and questioning to the point where they have had to think outside of what they think they know and get a result.
Still looking for the right one !!

Michèlereply
– In reply to: Irena

We really liked Dr Alan Forte at Racecourse Road Vet Clinic in Pakenham. He was excellent for small animals and the costs were entirely reasonable. Then Matt Jacques at Devoted Vets in Warragul. Matt was brilliant and Ross felt the same. Moving up here was tough in that respect.

Irenareply
– In reply to: Michèle

Thanks for that Michele. Definitely keep them in mind should we need a vet.