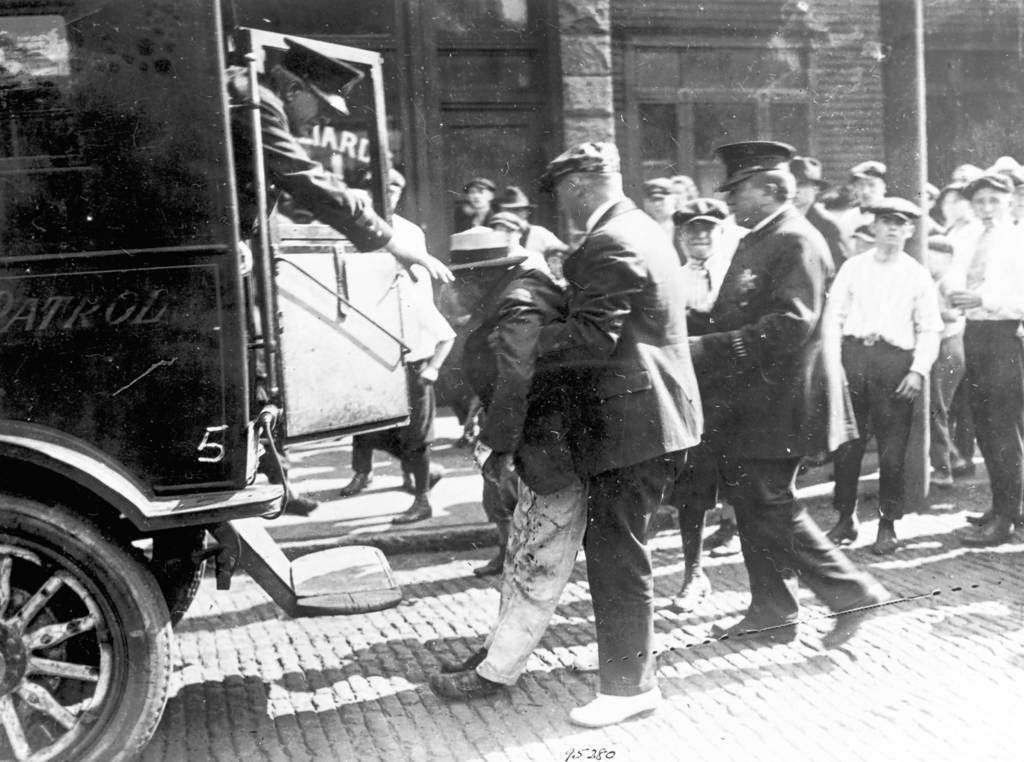 My husband asked me last night about the rioting in Baltimore over the crippling death of Freddie Gray. He said it felt like America was crumbling. I said I thought it already had. That’s why Freddie died.

Then I said, maybe it takes the country falling apart to come back together. The atmosphere of apathy is suffocating.

America has an ugly history of racially-ignited riots detonated by an often even uglier incident. The image above is from the 1919 Chicago race riots. The photo shows a man, killed in the riots, being lifted into a paddy wagon. With Freddie Gray on the mind, the photo seems familiar.

Although ironically, the police were a protective force for the black community during those historic Chicago riots when bands of whites ran searching to injure or kill their black neighbors.

The event almost 100 years ago on began on July 27 after white bathers at a South Side Chicago beach stoned a young black man who had drifted into the waters of  the whites-only portion of the 29th Street Beach. The stoning caused him to drown.

Reports say that 38 people died in the seven day riot, 23 were African American, some also archaically killed by stoning. The rest were white, but of the over 500 people injured, two-thirds were black.

I’m not surprised about what’s happening in Baltimore. In fact, I think it’s maybe long after time, generally speaking. The act is not restricted to Charm City.

I don’t endorse riots. I need to say that. There are leagues of innocent people who suffer devastation when rioters loot and destroy premises and property.

But it might take the rage of a population like Baltimore that has borne the weight of poverty and violence for so long to decide they have had enough. Enough of the corruption, the wastelands of neighborhoods, the racism and inequity in education and employment.

Shorten that. Call it the inequity of living.

Ferguson still hasn’t settled and it’s probably a miracle the death of Walter Scott in North Charleston did not evoke the same mass rage after yet another unarmed black man was killed by a police officer. Those are the national headlines. You can’t forget that across the nation, as just happened in Tulsa, there are shootings and killings of African Americans, perpetrated by law enforcement at a disgraceful rate.

What drives police behavior is likely driven by a multitude of factors. There would be the climate in the station and among the force, overworked and under-compensated officers, pressure from above to meet stats, all infected by the culture of crime and frustration that governments don’t do enough to stem the flood.

There is not enough funding for employment services, jobs, education opportunities, counselors, mental and emotional health services or rehab for the financially challenged, not enough to help victims of violence in all its forms, not enough homes, not enough child care.

That does not condone what the actions of these Baltimore police officers who may have broken the neck of Freddie Gray. The ‘may’ is only technical. The man was broken in their custody. As far as I’m concerned, I don’t believe there is any reason in the world for a person charged with protecting to maim and murder.

If it’s one bad seed out of twenty, the seed is still planted in that population of police. The existence of underprepared, biased, unstable or virulently dogmatic police officers scattered throughout American stations is an endorsement in itself.

They must hold themselves accountable and enact reform.

So maybe after the flames and dust settle this conversation about the culture of racism in America which extends to those we trust to keep us safe, can really take the center stage.

After the anger, then maybe the talk will follow.

It has been said the definition of insanity is doing the same thing over and over and expecting a different result. How we’re working on racial equality, it’s not working.

Useful info. Lucky me I found your site by chance, and I’m surprised why this accident did not happened in advance!
I bookmarked it.

Thanks for stopping in. Fantastic that accident happened. Hope you have time to read more again sometime soon.