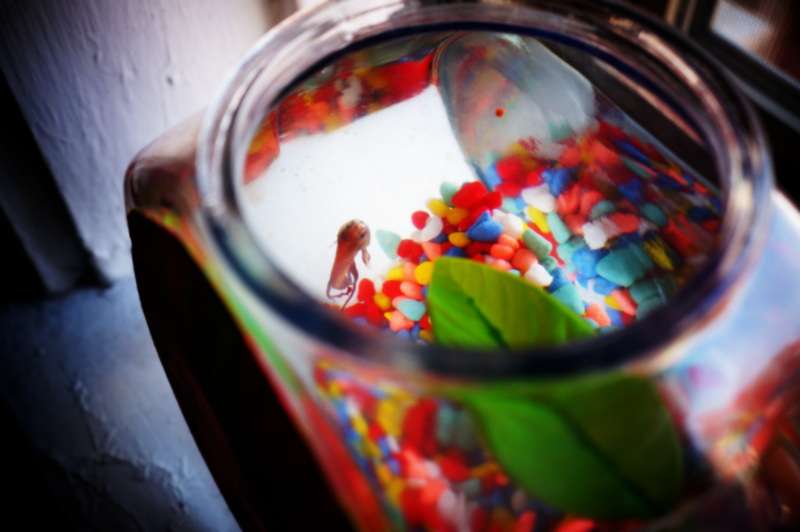 I know somebody close to me who once carried his life around in a plastic grocery bag. The kind of bags found blowing feral across highways or trapped in trees, and when he graduated to a man bag, it was a great relief to everyone, because watching a well-dressed, kind, lovely man toting his stuff around in a plastic bag was a little sad.

You just wanted to hug him and give him a hot meal.

The bag man comes to mind because after several thousand miles, days of flying and driving, I find myself in an apartment with a dead fish and the vibrations of a man who would paw through his life hopefully, yet shabbily, as though the episodes and items which define him are tossed around in such a plastic bag.

The story really began five months ago when I booked a flight to see my family and friends in the US, and thought I would take another stab at an Airbnb.

My last attempt was one year ago, and the fellow sold the place two weeks before I was to fly, sending me into a panic. So there were misgivings when I thought I’d try again

Long story short, it was a repeat performance. This man wrote me about two weeks out from the trip to tell me his condo association had come down hard, and nixed any Airbnb guests in the building, but my stay was still assured.

Now, I don’t know this man from a bar of soap, or a man-shaped bar of soap, so I hoped for the best.  We plotted that should I be discovered, I was his cousin, and I had a few requisite details to appear credible.

And so the night of my arrival, I found myself creeping up four stories to the top floor of an old apartment building I’d seen since my youth, with visions of its grand interior. When I approached the screen door, wedged open because the wood has swelled and warped with age, there was little evidence of grandeur.

Instead I found myself in what feels a very personal, physical expression of a man, late 30s, on his own, oblivious of grime, desperately in love with his young son. I imagine there is a divorced partner somewhere and this man gets the boy sometimes.

When he does, my guess is, he makes a brave and likely successful effort to be a good father.

Amidst the fridge magnets – a silhouette of a bikinied beauty from “Hawaii”, a plastic frosted beer mug from Minnesota, an alliterative epitaph about the most important things in life (blues, booze, b-b-q, Memphis, TN)- there are photos of the boy serious-faced in his pre-school class, small drawings of faces scrawled without care for shape or scale, but earnest, and obviously treasured by his father.

The furnishings are spare throughout the apartment, and I steal lightly on the bare floorboards as not to raise any suspicions from the resident below.

The chairs, one sofa, small work desk, all seem like the kind of second-hand items you’d find in the back room of Salvation Army, but in his crusty kitchen, that seems to be used mostly for making green tea and margaritas, are high-end pots and pans I can’t afford.

So I creep, and though I don’t want to open the sticky kitchen cabinet doors more than I have to, or think about prying open the heavy old mirrored closet doors with their tarnished brass knobs, I venture into the boy’s room.

It is mostly empty, but has a bunk with a curtain across the bottom bed like a small tent, happily cluttered with stuffed animals. A copy of Corduroy sits atop a stack of children’s books, and there are two posters with Toy Story-like characters and one piece of colorful construction paper spackled with stickers proclaiming “Head of the line!” – perhaps a testament to the child’s good behavior and leadership skills.

In his closet are an unboxed Ikea dresser and other accoutrements befitting a small boy. There’s a fan, and a small air-conditioner to fit in his window on hot nights.

And there is the fish.

A day out from my arrival in Chicago, I phoned the apartment owner from old-town Omaha and we ran through a few details. He asked if I would feed a fish and of course, as a professional goldfish keeper, I agreed without hesitation.

The fish was a scarlet Siamese Fighting fish, sedentary, at the bottom of a gaily-gravelled bowl on the man’s bedroom dresser.

The bowl has a mid-sized paper plate, hand-colored by the boy, taped to the back. A plastic leaf is suctioned near the water surface, and I felt this incredible sympathy for this fish, who seemed to think breathing was an effort.

I’ve had these fish as a child, and never successfully. You often see them in pet shops in tiny glass globes of water, dully adrift in their Truman Show miniature world.

They only seem to come alive when you place a mirror beside their bowl and instantly the fish transform, flipping out their gills and unfolding their fancy fins in a display of aggression toward that imagined enemy.

This fish did not have it in him. In fact, his fins seemed shriveled like strips of dried glue you might squeeze onto your hand as a child, to luxuriate in peeling them off in one wrinkly strand after another.

On Saturday morning, I thought I’d see if I could liven him up because he was disturbing me. He was unable to swim it seemed because of his vestigial fins, and seemed to drift more vertically than horizontally. That was worrying. I held the bowl against a closet mirror in the hallway to see if he caught a glimpse of another fish, he’d get his mojo stirred up.

I put him on the bedroom windowsill, and then he seemed a little more animated. It was a hair chilly, and so I put him back on his dresser, gave him one tiny granule of food, took a shower. When I got out, I noticed he was halfheartedly swimming around, and though I thought he might have woken up, now I think he was in his death throes, because when I returned to the apartment later in the day, he was well and truly dead.

All I could think about was the kid.

I wrote to the father and said I was sorry but his fish was dead. I was concerned for the boy, because for all I know, this fish is his Superman, or his Buzz Lightyear, or the very best thing in his young life.

The man already told me his dog has died at 15 in December, and there are several photos of the dog around the apartment, so I’m thinking this child can’t lose another pet.

Though I was loathe to do it, since I know a bowl is a sad existence for a fish, I offered to replace the fish with an identical specimen.

The man was kindly dismissive of my worries, texted me he thought the fish did not seem well before he left, and said his “little man” would have to come to terms with life and death at some point.

So tonight, I have to go back and covertly steal up those twisting back stairs, creep again across the floorboards and scoop this little fish carcass from the bowl.

I’d rather not flush him away, because it seems a poor send-off for a once-glorious creature, with his once fiery rippling fins. The kind of fish who would accompany Neptune, or mermaids in their exploits under the sea.

And it seems like a kind of symbolic failure of this dad who is trying so hard to be all he can for his little boy. I’m of half a mind to get a replacement anyhow, just so they can return to find that red fish, cranky and handsome in his carefully decorated world.