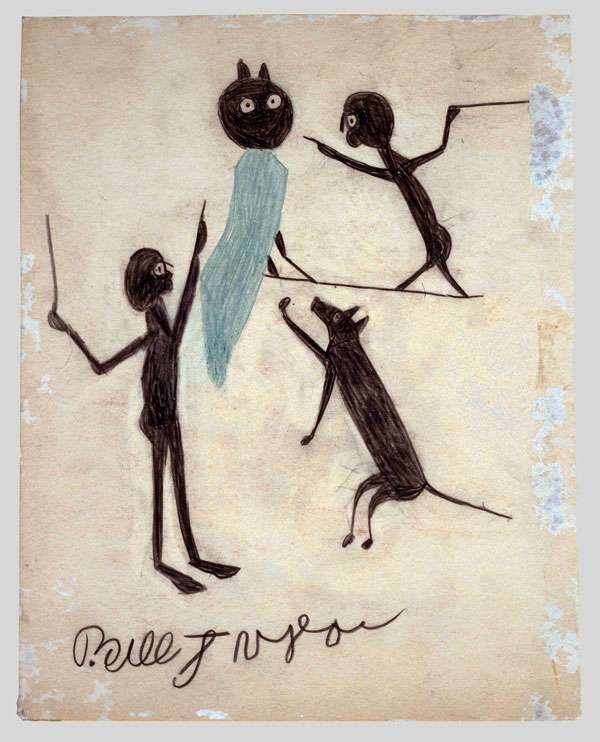 I was 21, and teetering between originality and influence. I was an art student, and that was just about the right place to be.

Even before those crossroads, I had moved beyond painting, a disappointment to my mentor, Peter Bodnar. He had been a guiding force in my work, and my mentality about what a painting was about, but I felt compelled to try new things, and moved on.

A contemporary art survey course seduced me with Ann Hamilton’s 1989 Privation and Excesses, and I waded into installation and performance pieces. The work was personal, laborious, very space specific, and I was having a ball.

All my work had been highly intricate, detail-oriented, sometimes too precious and always time consuming. In the midst of all, somehow I was exposed to work of what is commonly called outsider, or self-taught artists.

There are many, and most have the hallmark of little to no artistic training, but rather a genetic calling to build or draw or paint, and the work ranges from the very raw to the meticulous.

And I saw the work of Bill Traylor.

Bill was born in Alabama in 1853 into slavery, and lived in its aftermath as a sharecropper until a move to Montgomery in 1928.

He began drawing and painting real, autobiographical and fanciful scenes on found materials, never as a means to anything but self-expression.

His work was created late in life, and he remained active and developing until his death in 1949.

I caught up with Traylor as his posthumous star was ascending, and so much of it was still in common space before it was snapped up by collectors and museums. The work affected me, and influenced by own work at the time.

One trip home to see my folks at the time, I took the el downtown, and walked up to River North to binge a little on Traylor’s work at the Carl Hammer Gallery.

When I’d had my fill, I made my way down to the Chicago Sun-Times where my dad worked, and waited for a lift. Once he’d wrapped up his column, we walked across to the parking garage, dove into Lower Wacker’s maze. As we hit the Eisenhower for the fifteen minute hurtle home I told my dad about the show, and about Bill Traylor.

How he took it at the time, I don’t know. My dad is a career auto writer, eclectic, whip-smart, with an inspired and unique view of the world. He is sometimes conservative, and often surprising. He inspires me to be better no matter what I do, but I wouldn’t define him a visual animal when it comes to art.

He appreciates the styling of the Arnolt Bristol, the gardens created by Claude Monet, or summer evening haze of gold, but probably not Bill Traylor.

Nonetheless, it must have been the next evening I was readying myself for the 150 mile drive back to the university, and my dad had a bag for me.

Inside, was a book: Bill Traylor, His Art, His Life – a large, lovely book he had purchased from the Carl Hammer Gallery for me.

How he got hold of the book, or where he knew to find it, knowing he had never browsed around the gallery district, that he even remembered Bill’s name, I don’t know. I didn’t ask. I was just so moved by the gift.

It’s Father’s Day, and I was thinking of all the times my dad has been there, in his way, for me. Thinking of countless nights I fell asleep to the Rolling Stones rocking in the living room, taking me to the Shrine Circus, All the President’s Men and Star Wars, teaching me to roller skate and drive and appreciate classic cars.

I will always remember laughing with my dad until we cried over the antics of the original Son of Svengoolie and a Christmas-tree lit room draped in the dissolve of Strangers in the Night, with Frank’s “Doobie, doobie, doo” trailing off at the end, when the Chairman of the Board seemed masterfully bored by the recording session.

When we talk, he seems to intuit exactly how I’m feeling, and though he doesn’t usually say it, a follow-up email proves how much he gets it, and I save every one.

I am grateful my dad is still here, still healthy, very much loved, and I have the chance to talk to him every weekend.

-The featured image is by Bill Traylor, “Untitled (Two Men, Dog, and Owl),” 1939–1942, Montgomery. Colored pencil and charcoal on cardboard.