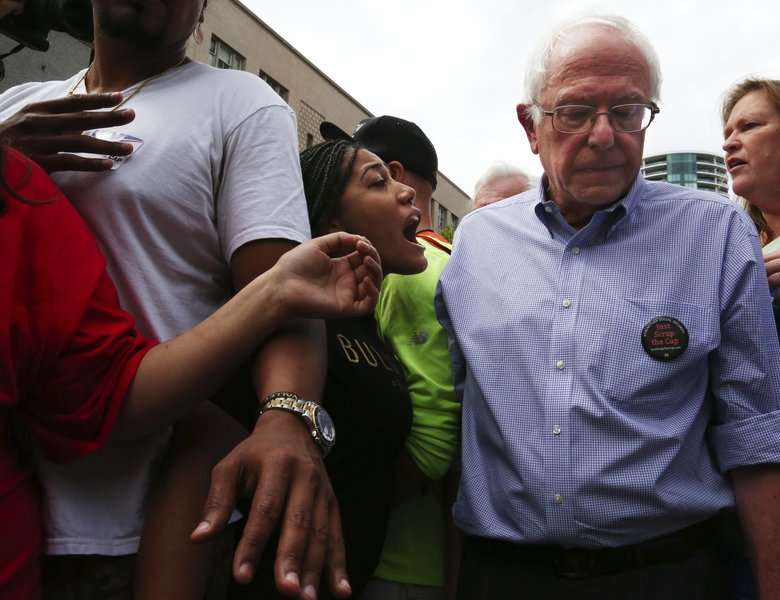 I have to say something about what has happened at the recent Bernie Sanders appearances.

I am not black, nor am I Native American or Latino.

I’m a straight, white woman, raised in a middle-class family with a good education. Though I feel I lie to the far left of center, my color will always mean that I cannot understand the non-white woman experience. Even my speaking out for racial equity seems to ring with a degree of illegitimacy, because of the color of my skin.

Saying that, Bernie Sanders is the 2016 presidential candidate I feel most comfortable with, solely because of his dogmas. He has been under the microscope lately, drawing fire.

I think Bernie could have handled the Netroots Nation Phoenix conference much better. I agree with Jason Johnson that it was an opportunity missed. Barak would have turned that protest around 180 degrees and honestly spoke to the anger unleashed at the event, shared with Democratic candidate Martin O’Malley, who fared even worse.

I also felt disappointed that Bernie stood aside mute, looking beaten, and left that first Seattle stage when he had the crowd. By not speaking after the frustration and outrage of the BLM women, he lost the chance to really get to brass tacks and talk about the regeneration of segregation in America happening in far too many sectors. Where he might have stood up to speak on his lengthy record of civil rights in an honest, truthful way.

But he didn’t. He left. And kind of blew it, and I find that an enormous blow because I think that Bernie can make a difference.

Clearly, Bernie has a lot to learn about this nation as he travels and encounters the voices throughout, but I feel his platforms are sound and solid and applicable to all those voices.

If there was anybody able to drive the nation back to a reasonable, objective, sane path as this 21st century matures, it could be Bernie.

Maybe it is his humanness that has made him an accessible target for the recent Black Lives Matter protesters. I don’t know. I am making assumptions based on his belief system that is underpinned by equality for all.

But if there were ever any better targets out there, the entire array of Republican candidates would be like a Brach’s Pick o’ Mix; any bin you reach your hand into will being out a shocking record of disregard for human rights.

Apparently there are some people out there who are targeting the women who crashed Sanders’ Seattle campaign.

But now I think it’s time to listen. It’s time for Sanders and every single candidate to understand the black movement for change is real and necessary. So is a movement for change for Native Americans, whose voice is largely unheard but the statistics are just as, if not more, devastating.

I think all American people who decide to make a stand against any candidate should do their homework. We should read about each person’s past voting record, their stand on the issues we value, and learn before another podium is hijacked.

I think the country can ill-afford to shipwreck a campaign of any person who has the potential to skipper the nation to a better place or open the gates for a catastrophe like a Donald Trump.

I also believe each candidate has to have sensitivity this is a fragile time in America and do their homework as well.

Pramila Jayapal, a state senator from Washington state’s 37th district, the “only woman of color in the state Senate”, wrote an excellent editorial in response to Bernie’s failed first Seattle presentation. She said Bernie

…has to learn to talk about racism in that way, to connect his ideas on education, economics, incarceration, and race.

I agree. Her jury of feelings on Bernie are still out, but said as a politician herself, she knows there is a learning curve, and the Vermont Senator seems to be riding that curve.

While that happens, I think the white population who shout over those words should step on their tongues, hear what those who disrupt have to say before damning the action. When we don’t listen, we’re right back where we started from.

Maybe as a result of Netroots Nation, Bernie has appointed an incredibly powerful woman, Symone Sanders, as the campaign’s national press secretary, She looks to be extraordinary and formidable.

Her track record, her intensity and commitment to the rights of African-Americans says a lot about Bernie’s ideology. I’d challenge any other candidate to make that decision to hire a benchmark individual to guide their campaign.

He has also released a comprehensive racial justice policy. So perhaps he is translating his gut feelings and economic and social outlook into a humanized package.

It will be interesting to see what happens next. In her response to the Seattle protest, the co-founder of BlackLives Matter Alicia Garza said,

Every one of these candidates is going to be pushed. Every. Last. One.