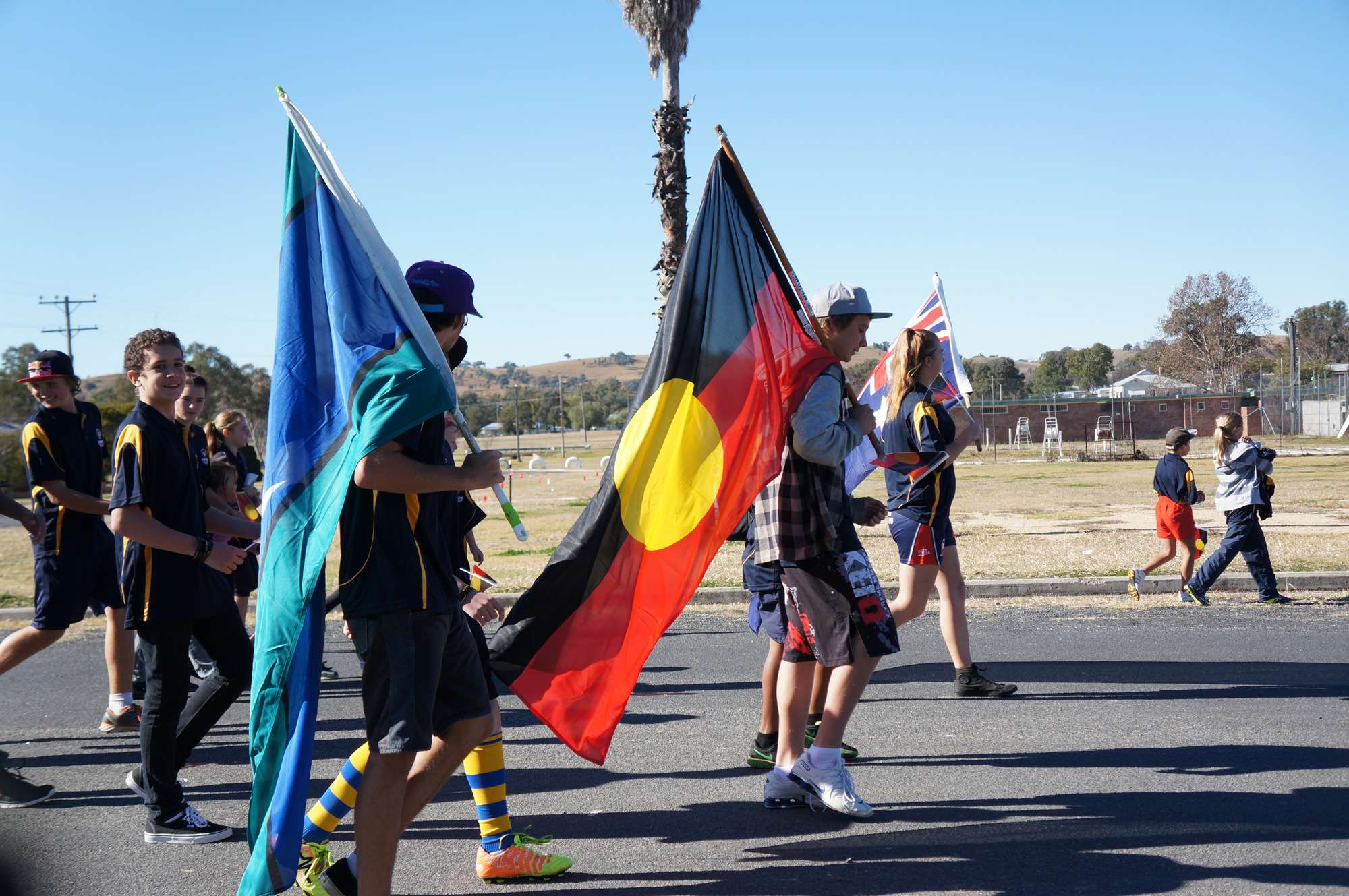 Aboriginal and Torres Strait Islander readers are warned that the essay below contains images of deceased persons.

I don’t know if I am changing or things are changing, but NAIDOC Week seemed different to me this year.

NAIDOC, or National Aborigines and Islanders Day Observance Committee  is the annual week that recognizes and celebrates the first people of this continent.

In the towns I cover for my job, I was privileged to attend three NAIDOC marches and celebrations. Though my base of acquaintances is expanding each year, and in each town I kept turning to say hello to somebody I knew, the feeling was different.

Instead of an event more exclusively for the Aboriginal community to congregate and commemorate, it felt like a town event that surpassed color and culture, but at the same time, was a joyous, happy gathering celebrating just that.

One aim of NAIDOC is to meld communities within communities so the non-Aboriginal and Aboriginal people can learn about what makes them unique, and qualities shared.

Another is to recognize a population that is often buried or splashed with preconceptions.

In the midst of NAIDOC Week, I heard something that made me re-evaluate what I understood about Aboriginal rights in Australia. It may have changed my opinion, but it certainly reinforced my feeling I am missing more than I know.

Like probably a lot of non-indigenous people, I thought I believed that Aboriginal and Torres Strait Islanders should be recognized as the nation’s first people in the Australia’s Constitution.

In my mind as a white person, I suppose the more rights, the better. On the surface, it made sense.

It was not in fact until 1962 that Aboriginal and Torres Strait Islanders were allowed to vote.

It was as late as 1967 when the referendum passed to count indigenous people as citizens in the census, and to allow the Commonwealth to make laws for Aboriginal people.

In fact, it was well into the 20th century that Aboriginal Australians, like these ‘criminals’ were treated little better than dogs, kept in slave-labor situations, and until the 1970s, were removed from their homes and placed in schools and orphanages as part of the Stolen Generation.

Dr Elizabeth Grant of the University of Adelaide has researched the history of this archaic, humiliating restraint. Though shocking, the use of neck chains was only discontinued in the 1940s and documented as late as the 1960s.

This is no way to treat human beings.

Like the Native Americans, indigenous people were systematically moved off their land, so deprived of the sustainable life they had led for thousands of years.

And like their American counterparts, Aboriginal Australians were moved to reserves often on the newly created non-indigenous stations or properties. The displaced people soon became so dependent on the charity and supplies from their white neighbors’ ration stations, it took nothing to move them into a position of slavery.

The litany of injustices against Aboriginal Australians by non-Aboriginal people is exhaustive. And it continues.

So of course, I think of the Recognise campaign, and I think “Of course!”

Prime Minister Tony Abbott and opposition leader Bill Shorten met with a select group of 40 indigenous leaders on Monday, July 6, to hear their opinions about recognition.

Outside, there were many voices of dissent. And that’s what made me think.

About 60 protesters convened to express their discontent or anger about the constitutional change.

“We don’t recognise the Aboriginal ‘leaders’ that are in the meeting with Abbott. They don’t represent us. They are not fighting the community closures, the second stolen generation or the massive incarceration rates of our people.”

Recently, writer and host of IndigenousX Celeste Liddle reported that an 87 per cent majority did not want recognition in the founding document in an article for the Guardian.

The comments I heard sent a message Why would Aboriginal people want to be part of what is essentially a non-Aboriginal document, when its foundations excluded indigenous Australians at a time when they were treated as non-humans?

What I hear from that is exactly what a democratic process should reflect, and indigenous people should enjoy, like everybody else.

The canvas of voices should be heard, and the consensus decided by the people affected, but government figureheads who have decided they are doing the ‘right thing’.

There is a resemblance to those  kindnesses (or more sinister intentions) of white couples over decades who chose Aboriginal children for their own after they had been snatched from the arms of their families and community.

This is a horrible legacy.

I would like to think a white Australian government would realize Aboriginal and Torres Strait Islander Australians should come to their own consensus about whether they want this recognition in the Constitution.

Time and thought should be taken.

It is their right to make that decision. I believe it should be in their hands.

Hasn’t it been long enough that voices have been unheard or disregarded?

-The featured image are boys walking proud with the Aboriginal and Torres Strait Islander flags in the Ashford, NSW NAIDOC march, July 6, 2015.