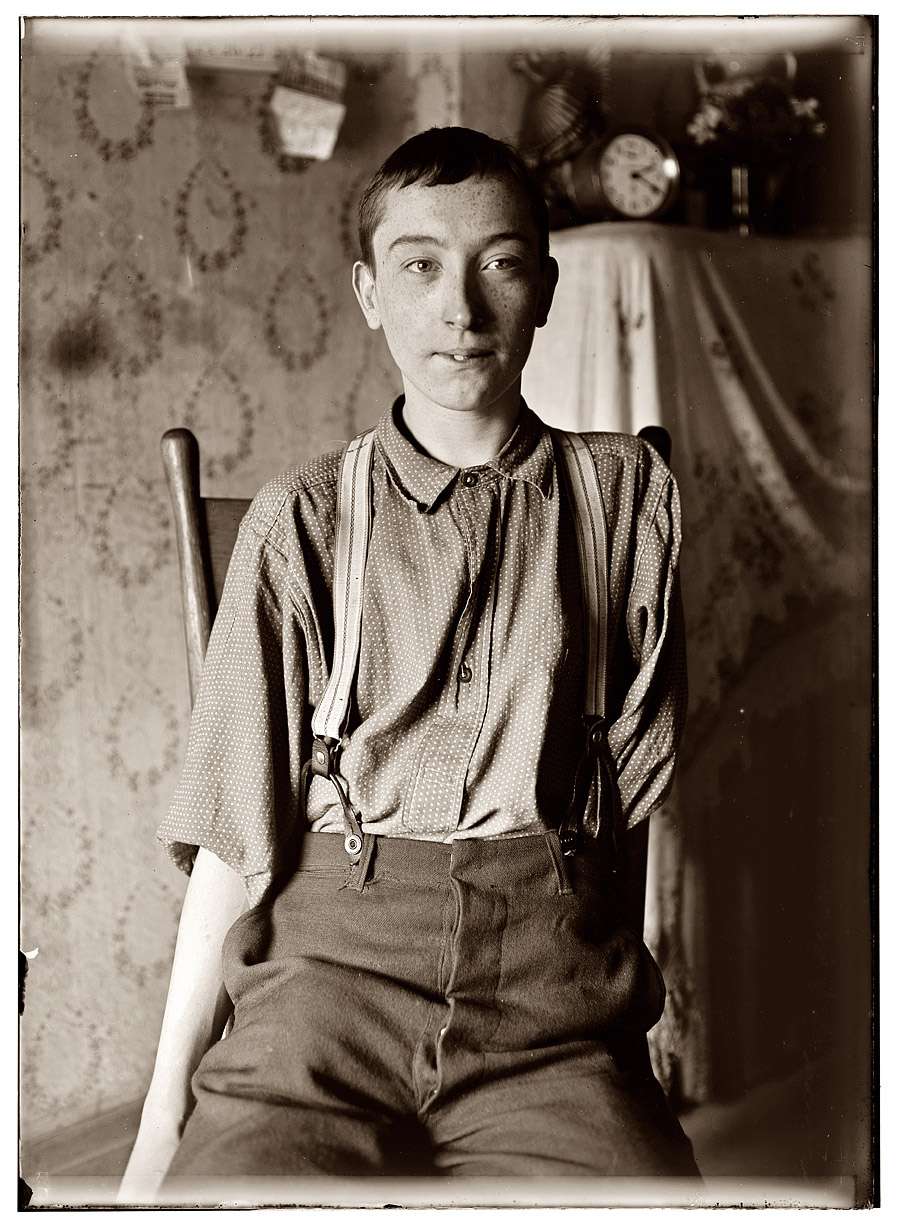 Had his left arm pulled off near shoulder, and right leg broken through kneecap by being caught on belt of a machine in Spring Works factory in May 1908.

Had been working there more than 2 years. Was on his feet for first time after the accident the day this photo was taken.

No attention was paid by employers to the boy either at hospital or home according to statement of boy’s father. No compensation.

Despite his disability, it seems Harry was able to find work on the railroad, and led a full life until his death, just a month before his 86th birthday.

I have been wondering for some time what the now-declared 2016 Republican presidential candidate, Donald Trump, means when he says “We’re going to make American great again”.

I do not understand this. Perhaps, because we are in an age where we have forgotten the past. We are hungry for 30-second news and disregard the lessons we learned in attempting to overcome our grievous history.

Here are just a spare few examples of that past, that ‘great again’ past Mr Trump flaunts, including the thousands of children, like Harry above, others just out of their infancy, laboring for their families to eat and survive.

Japanese-American child tagged and waiting while his family waits to be moved into a US Japanese internment camp during World War II. Below, a hateful message.

In 1975, 10 Latino women sued the state of California, the United States government and doctors in Los Angeles county for forced sterilizations. The women stated they were unaware they had authorized the procedures when they were admitted to give birth in the 1960s and 1970s. It is reported the women were denied pain medication until they had signed these forms.

An estimated 20,000 women were sterilized by the state of California between 1909 and 1979.  It is not alone. Several states have been found culpable for this act of what is commonly known as eugenics, and have now paid compensation to victims, which I’d wager will never be enough.

Eugenics as “genetic cleansing”, and the weeding out of unwanted traits or future individuals, of course was not limited to women, but affected thousands of non-white and/or mentally or physically compromised US citizens and residents for decades. The practice considered a person’s physiognomy, skin color and hair texture and thus identified deficiencies in character.

Women were not the only victims, Men who fit the profile were also sterilized or experimented upon until the practice was formally abolished, though its vestiges still remain today in contemporary medical practice.

The famous mass burial of Native Americans slaughtered at the Battle of Wounded Knee, December 29, 1890. A blizzard followed the massacre.

The US military engaged civilians to bury the frozen bodies of 150 men, women and children. A further 51 were wounded and history records many died later from their wounds in an age before antibiotics and antiseptics.

Native Americans continue to be victimized in every possible way since Europeans colonized the country and systematically took over its lands. The population remains one of America’s least thought about and most dire situations in regard to education, health, employment, mental health, housing, equality and consideration by the rest of the country.

Discovered to be contagious in 1905, polio killed thousands and crippled exponentially more in the early 20th century.

In 1952 alone, nearly 60,000 cases of polio were diagnosed, 3000 died from the disease and 21,000 were left permanently disabled. The vaccine was first introduced to patients in 1954, and announced formally released worldwide in 1955.

Patients at the  Pilgrim Psychiatric Center, Brentwood, NY, in 1938. Photos above and below, by Alfred Eisenstaedt.

How far have we come in the routine treatment of our mentally compromised and disadvantaged citizens?

What can be said about America that is great, was inspired by words recently heard from the 1948 vice-presidential candidate and then elected Alben Barkley at the ’48 Democratic National Convention keynote speech.

In the Declaration of Independence, Thomas Jefferson uttered these undying words, in the equalities of all people.

Thomas Jefferson did not proclaim that all white men, all black men, all yellow men or red men are equal.

What he declared was, that all men are equal.

That was almost 68 years ago. Where did we go wrong? Were we great back then?

At least we have some experience of recovering from World Wars, from the Great Depression and the Dustbowl. We have travelled through women’s rights, civil rights, welfare reform. We have made massive strides in medicine to places unheard of when children were doomed to a lifetime of polio-induced disability.

We have polluted our oceans, waterways, land and air, and killed our fellow species, some to extinction, but we do know how to sustain what is left if our government leaders are brave enough to put their shoulder in.

We have the maturity and intelligence to recognize the legacy of America’s deep connection to racism and fear of those that lie beyond our borders and the unknown.

I guess the question is not about making America great again, because the statement’s grand irrelevance distracts from the real work the US must do to enact change.

So, can we finally apply the lessons learned from our 150 years of grievous mistakes?

Can we turn off our televisions, take our eyes off our tablets and phones and talk to our neighbors again?

I think America can. But not with a seedbed of hatred, ignorance, disdain, racism, xenophobia, and misogyny and the arrogance, which is Donald Trump, in the White House.

It is so easy to hate, and hate breeds contempt. We cannot afford to be contemptuous anymore. Our world’s environments and its nations are far too fragile.