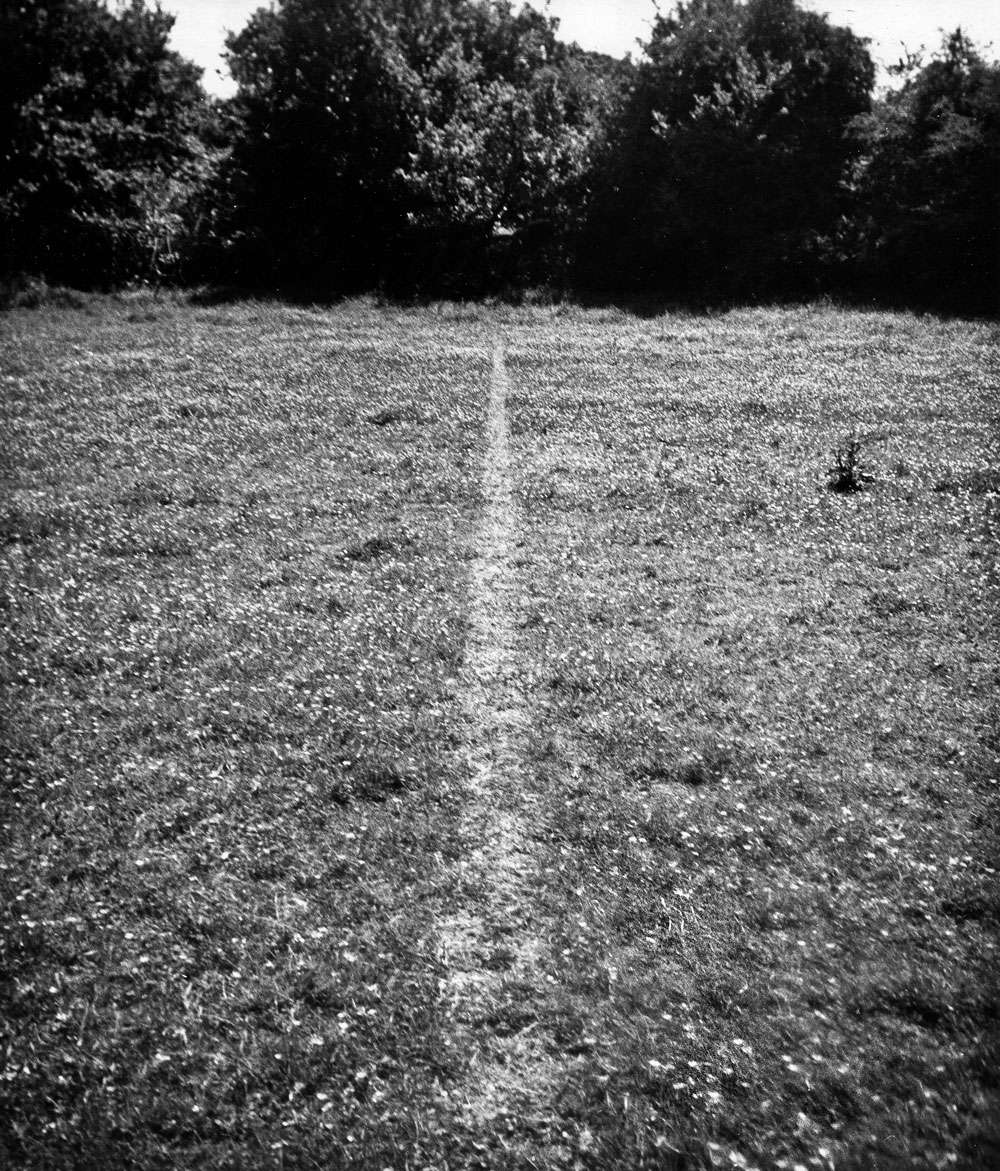 When I was a child, I used to use my trusty 110 camera with its wrist strap, to capture space in a photograph.

I would cycle down in the morning to Taylor Park, about a block away, and crouch at the base of the hill to shoot upwards. My pictures would come out as an arc of mowed park grass and a strap of blue sky. I was aiming at landscape.

One featured my Schwinn Collegiate Sport 5 looking like it’s on a mountain in Scotland. In my head, anyhow, In reality, you can just see the tops of the tennis courts.

It was enough. I felt satisfying that I could take a photo of an open space in a very non-open space. Since then, I’ve been on a mountain in Scotland, and I can honestly say that my imagination and the reality were pretty much the same.

As I got older and had a better bike, I walked and rode much further and I began to fulfill my ambitions to be in more uninhabited places, and I mapped out my journeys in my head.

It wasn’t how long it took me to complete my routes. It was how far I went, and how I went.

When I went to college at 17, I took my walking and cycling histories to Urbana with its bumper-sized College of Agricultural plots and pastures that stretched far south of the campus.

It was like winning the lottery. I had a million pathways.

In those early days, there was only one road, Lincoln Avenue, that plowed in a lonely way towards the farms. That’s all changed, and I think the dogleg just past the dairy farms where I used to work now has a four lane traffic light.

In fact, I remember going out into that ghost road before they opened it to traffic and lying in its center. I knew everything was about to change, and the rolling green lanes between Poplar corridors and test plots would soon bisected by cars.

But the real roots of mindfulness were established by my meanderings before that infrastructural progress came to town.

A second discovery came when I transferred from the College of Ag to the College of Fine Arts, and in my second year as a painter, learned of Richard Long in an art survey course.

I found an old friend in those images. The evidence of his exploration was the piece itself and I totally got that.

A Line Made by Walking (above), from 1967, was created two years before I was born. Richard stopped off on his journey from St Martins to Bristol and cast this line out by his footsteps, took a photo, and went home.

As the years passed, Richard ventured across the globe, moving stones, soil, making a mark with the passing of his footsteps.

Later, those materials moved into the gallery and museums. I am not such a fan, and I wonder if he feels the same. To me, the purity of the residue of being somewhere was always what made his work so strong, but artists have to make a living, too.

He has said, “Walking has enabled me to be an artist potentially anywhere, and in a very free and simple way.”

I often wondered then as I do now, if he ever felt tedium, or if he took that time to be mindful of his movement, his thoughts, his fatigue, dinner, tomorrow. I was inspired as an undergraduate and write to his gallery.

To my surprise, Richard wrote me back. He sent one of his books which he signed, and enclosed a note.

It could not have been better.

I have always walked. In fact, I would say I have never felt so much myself or so free from distraction and released from obligation as when I have walked.

When I walk, I find myself to be that same young person who prowled alleys and backyards, all the sun-dappled tracks scattered with deer droppings and fallen leaves, the dark streets of Minneapolis’ factory district, Glasgow’s old sidewalks north and south of the Clyde, the loping lines of Kansas prairie roads. It’s the same me that walks through the years, and I really need that.

I don’t think you can separate childhood from adulthood. I think you are the same person all through your life. So all the sensibilities that energise you as a child sort of flow through.

Lately, my walking has been confined to weekends when I have the daylight, and though I dread the coming heat of summer, I do welcome the long evenings when I can put in a good hour and half up and down the country roads from home.

Meanwhile, I have to content myself with the stillness of dark when I do my evening chores. I have never been good at walking in the dark. I get dizzy. I often think about those characters in Thomas Hardy novels that set out walking to the next town in the pitch dark and encounter others as they make their way.

My path to the horses is lit by a feeble headlamp under a sky linted with stars. We’re moonless these days, so the Milky Way looks like a crochets table runner on a black table thick with bright, twinkling crumbs.

Those are the stars above my home. A fraction, really.

If you were to stand beside me tonight, or last night, without the moon and the creep of chill in early evening clearing the air, the Prussian blue sky is thick with stars and planets.

The time spent being small in the dark, before I resume myself as big and space-inhabiting, inside with dinner cooking, and the television on, is important for me.

I need these moments of being alive, like a rabbit or an owl in the night. Not the clutch of worry of what needs to be done, or who is waiting for me, or anything but the whine of Wood Ducks and chatter of disturbed Lapwings and that endless, endless chorus of frogs, the swift phantoms of the dogs as they chase around before me.

All of us under that looming dark sky, I’m grasping at moments of mindfulness. And summer is on its way.