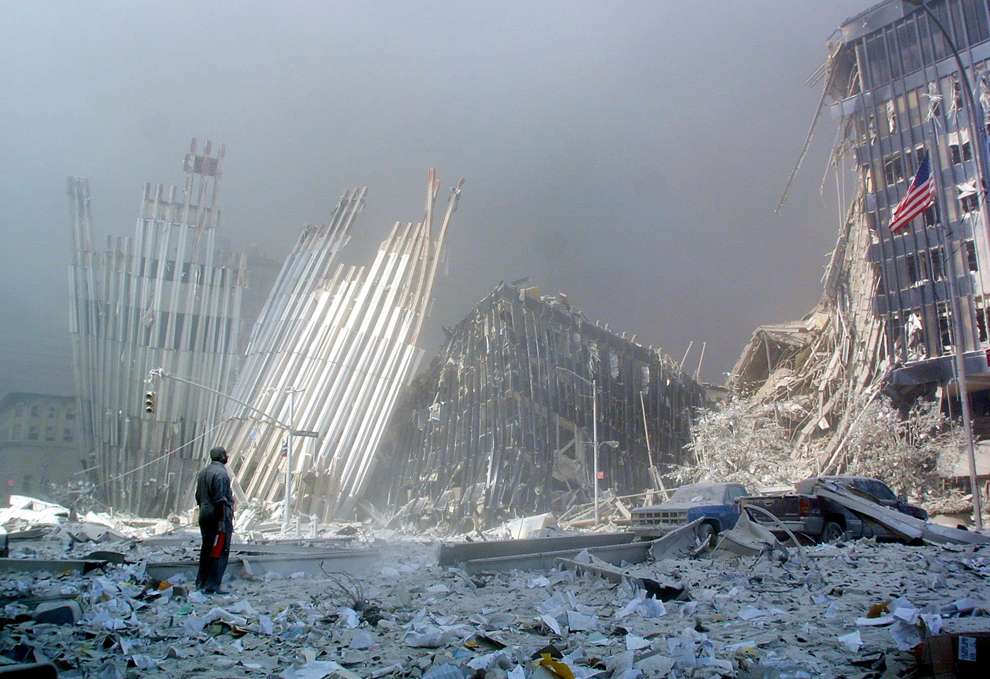 Like JFK, or the man on the moon, September 11, 2001 is the event people will share with you where they were when they heard the news, or saw the second plane hit, the towers fall, the Pentagon impaled by American Airlines Flight 77. The bravery of the United Airlines Flight 93 passengers who tried to live.

For some reason, this year in particular, I have been remembering that day.

I was at my desk at Kansas State University’s art department, and Bob Nellis, a friend and professor poked his head into my office and said, “I just heard a plane flew into the World Trade Center”, and ducked out again. It was about 8am.

I remember the initial thought was some small prop plane must have accidentally hit the tower, and with that image in my head of a small aircraft crumpling up against the building, I turned to the basic internet I had on the computer back then in 2001, had a look, and my world changed.

It was early, but there were people about in the building. I wandered into the hall, and saw a girl crying, some faculty, huddles of students, staff drifting, talking.

Eventually I followed a cluster of people down a flight, and we assembled in the enrollment office on the second floor with a team of women I knew slightly, but at that moment, we were all shells of shock.

Somebody found an old television on one of those five-foot tall wheeled carts you set up in front of a classroom of kids to watch a video, like a classic technicolor Disney film about woodland animals frolicking in the Rocky Mountains.

Somebody else got it going and we tuned in to real time and witnessed the cascade of fire and smoke from the towers, the first collapsed, we saw the second tower fall in what did not seem at all like special effects from a movie with Denzel Washington or Tom Hanks. Some people started to weep. People swore without any awareness of offending. We were stunned.

I used my desk phone on the university dime to call my mom, and we cried. We made no sense of it, we had few facts. Soon, the university closed for the day, and I went home. Nobody knew what was going to happen next.

I’ve still never been to New York. I don’t carry that badge of experience people who lived close to what we all call ground zero or passed the thousands of “Have you seen?” flyers or homages to the dead. I know people who knew people who died in the attacks, but I don’t know the victims. It still feels like all Americans who were cognizant on that day shed something precious, never recovered.

I flew in early October, just a few weeks after that day to Ottawa, and I remember the chaos, the endless lines and security making shit up to get people through, practically unpacking every single handbag and carry-on in an attempt to do the right thing.

But what I really remember were the night skies, just after the attacks.

I grew up under flight paths to O’Hare Airport and we all existed deaf to the rumbles of the jet engines overhead. Sometimes so low, we saw the landing gear. It could have been the Boeing 767s that were AA Flight 11 and United Flight 175 drafted right over my house several times. I don’t know.

In September 2001, I lived on a small property in Kansas and the skies were not the Tang-colored nights I knew from back home in Chicago.

Instead, they were wreathed in stars like fairy lights, and when you saw planes, tracking cross-country, or rising and descending from Kansas City, Omaha or Wichita, they were constant blinking beams moving past the constellations.

Though not after 9/11. Instead, the skies were empty of planes when North America closed its airspace for nearly two weeks, and it felt like an enormous intake of breath that was held and held, and held. It was an expansive reminder the world had changed.

I live in Australia now, and the skies here are thicker with stars than any sky I’ve ever seen across America, but far above, I can usually spot the twinkle of a jet. And each time I spot it, I remember the night I stood outside our barn, my chin tipped up and saw no planes. A silent reminder.

Nothing has been the same in our world. We lost the trust we took for granted.

-Featured image: A man stood in the rubble and called out, asking if anyone needed help, after the collapse of the first World Trade Center Tower on Sept. 11, 2001. Photo Doug Kanter/AFP