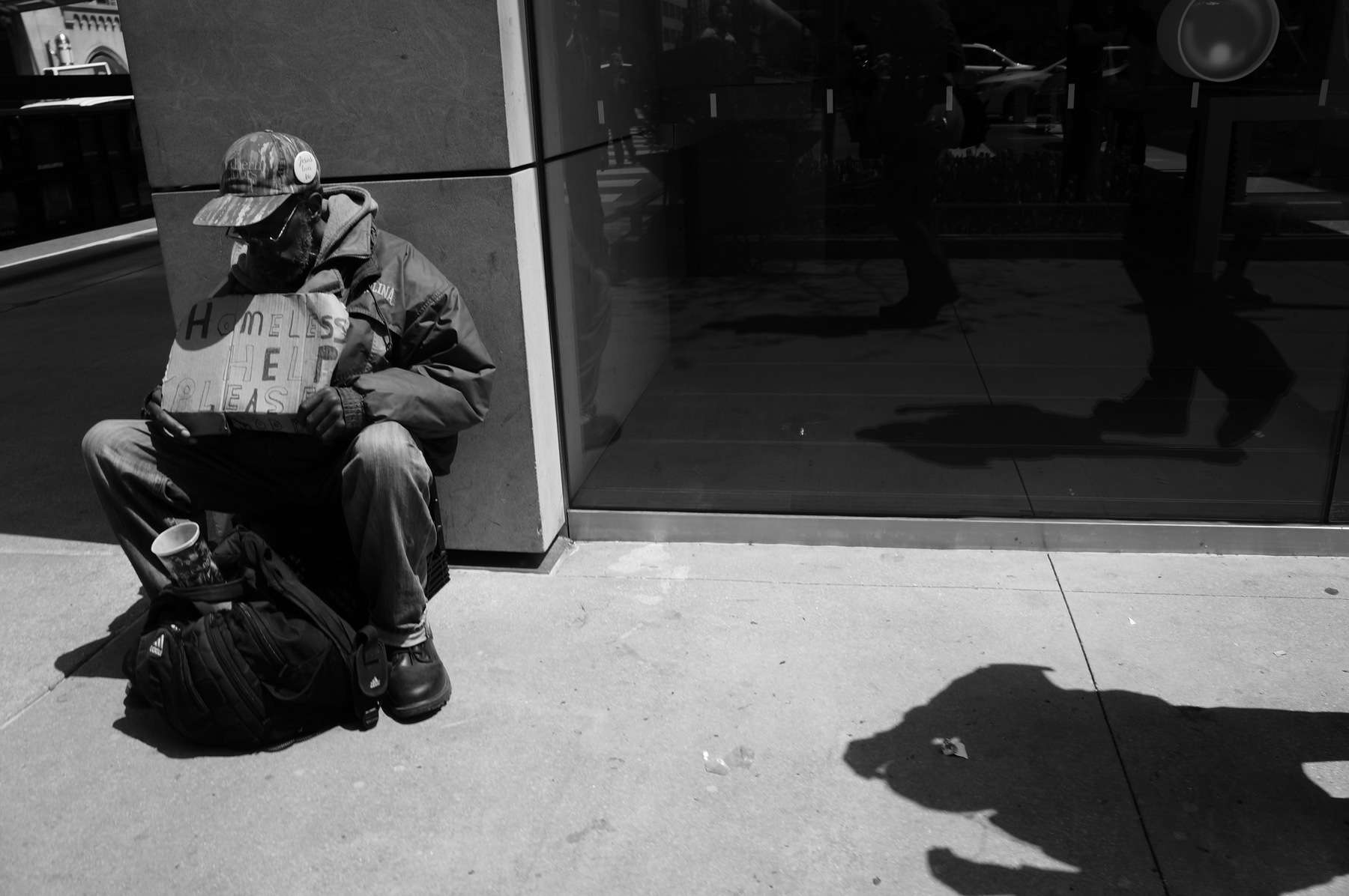 I just returned from six action-packed days back home in Chicago where I touched base with my family, and caught up with four of my oldest friends, and discovered a valuable new-ish friendship with a woman I have known since sixth grade.

It was a bit of a blur, those days; wringing the most from every moment I had. I saw some of the best of my city, and some of the still sadly neglected.

Each time I go back, I spend one day downtown. I love the energy that is Chicago; from the commuters, the sidewalks filled with people of all color and age, the cacophony that echoes in the canyons of the loop, the vestiges of the Chicago I remember from my childhood days, and the new improvements that keep the city hustling along.

This trip was no different, and I stopped into Central Camera on Wabash for a filter, which ended up being a filter and then a new lens that stole my heart.

Camera again  in hand, I went out walking, one block north and one block east to the Art Institute steps, taking photos all the while. Then I meandered through Grant (Millennium) Park up to the “bean” which draws international crowds on a daily basis.

The gleaming organic shape is actually titled Cloud Gate, created by artist Anish Kapoor and installed in 2004. Each time I come home, I somehow end up there, if only to see the masses of delighted people who walk around and beneath it. They touch and photograph the reflections of themselves and their companions.

On Wednesday, I took many photos of these folks enjoying themselves and studying the pictures they were also taking.

Last year, I photographed a standout elderly couple dressed on a very warm afternoon in their traditional clothing. This year, there were nuns, women in saris, people carrying babies high to focus on their small faces in the bean’s mirrored skin.

The experience of shared wonder always leaves me feeling especially emotional, and I took off with a pulse of warmth as I left the crowd around the sculpture.

I then headed north on Michigan Avenue. I had not been up the street for about five years, when I and my oldest friend Andrea took the walk up to Oak Street beach, and then winnowed our way back to the loop via the waterfront.

This year, as in all years I have been in Chicago, I saw the homeless. But as in my last two visits back, there was a difference to my memories of folks who were looking for a big hand up.

My father worked for the Chicago Sun Times on Wabash along the Chicago River in the heart of downtown. He was there for 40 years, and my grandfather before him at the Chicago Daily News, both located at that squat, very unbeautiful building which is long gone; replaced by the Trump tower that hogs up the river skyline.

From when I was a little girl, I recall panhandlers and homeless in the city, and I often saw them. And all through my childhood and teen years, there have been homeless parked in certain spots along the streets in the loop.

One man I always recall was the legless fellow who sat in his wheelchair outside Avenue Bank, right on Michigan Avenue. He was a mainstay. You would see the shadowy shapes of many people finding shelter along Lower Wacker, and each people would be serenaded by shaking cups of jangling coins from doorways along Madison, Randolph or Monroe.

I grew up not being a stranger to saying “not today”, or sometimes putting money in a cup. It was part of urban living. It’s actually part of all living. From rural to metro, you’ll find homeless.

During a trip home about five years ago, I was really surprised and disturbed to find a rash of new homeless, or panhandlers perhaps, scattered all across the loop. Young people seemed to be in greater numbers, squatting on every corner of State Street from Lake beyond Adams, parked on Clark Street and here and there along Michigan Avenue calling out to tourists and residents.

“What is this?” I asked my parents, I asked friends. My folks said there were always people begging on the streets, but I said, “Not like this.”

Maybe some were frauds, some were looking for cash for drugs, many would have been mentally ill. And many were likely without shelter of their own. All of them were highly visible. The numbers have diminished, but the homeless and needy are still actively making an appearance.

The most recent analysis by the Chicago Coalition for the Homeless reported that during the 2013-2014 school year, 138,575 Chicagoans were homeless and 22,144 were children. The number was up 19.4 % from the previous year.

On Wednesday, that appearance began about 100 steps from the bean. A fellow was draped across a park bench, mouth agape in his deep sleep, dressed in a well-worn Bulls jacket, filthy jeans, shoes with heels worn to nothing. I thought about the young Aboriginal kids back here in Inverell who reverently follow the cult of the Bulls, maybe never seeing a game.

But here was this fellow in the Bulls-heartland with perhaps nothing and nowhere to go but a sunny park bench a few steps from the corner of Washington and Michigan.

I kept walking north. Striding through the schools of walkers, I kept my camera snapping at the life on the street.

I encountered the next guy looking for help at Lake and Michigan. He was sort of smartly dressed, busy writing out a sign and puffing  on a cigarette as he detailed the recent events in his life.

There was a fellow at the Wacker end of the bridge, looking for hope. Then a woman was on the pavement, on the way to the Tribune Tower. She was reading a book, with a sign propped beside her indicating she was looking for a way to Wisconsin.

Clusters of police were stationed outside several stores up and down the street. I stopped and asked a pair why the beefed up presence? It seemed to me out of the ordinary to my mind and experience. They said it was a periodic thing, especially during the summer months.

Considering the November shooting deaths at Nordstrom department store, and maybe a heightened spate of shop thefts and pick-pocketing down to desperation required more police power, I don’t know.

But the desperation was played out right there on the pavements of Michigan Avenue; a homeless fellow here, another there, all grasping for the chance of help.

I feel that to the objective eye, a person who has got to a point in life where publicly acknowledging their vulnerability is their daily routine, is confronting. I didn’t give out money this time. I took some photos of just a few of the people I saw on my walk.

Here in Australia, as well as in the US, there are those with and too many without. But nowhere does it seem to stand out so bleakly as on streets like Michigan Avenue, where the people with little share concrete beside heaps of stores like Saks Fifth Avenue, Nike, Apple, Crate and Barrel and Brooks Brothers shoulder together in a retail sweep that attracts shoppers from across the world.

A pedestrian along these optimistic sidewalks might look at the homeless that sit slumped and sometimes slumbering as boils on the beauty of the coiffed Magnificent Mile.

I think not. I think that this is the most real we can get, when we either pass and assist or choose to pass and consciously ignore these humans wanting for just a portion of what many of us enjoy-a safe, secure life with a guaranteed roof and an assured meal more than once a day.

We pass with swinging paper bags of purchases. The homeless hold on to their square of cardboard with a slogan that might cause us to reach in our bag or pocket and add a bit to the amount that will scotch tape their body and soul for another day.

I feel more impatient for change as I age. I don’t think I can turn my face away from the stark desperation of anyone who will beg to live. Especially when it is only the toss of a die that might land me in their place.

In my job as a journalist, I learn more about our communities and their deficits when it comes to shielding our needy from greater pain. With my knowledge, I hope I can then lay out these facts so the right decisions might occur to give aid to the less fortunate who live among us. I hope.

I also have a hard time going past the homeless knowing I have so much and they have so little. Though there have been quite a few times I have felt duped:

The earliest was a time I was on Michigan Ave. and a woman said she ran out of gas and had to get back to Wisconsin. I gave her some money and months or maybe even a year later heard her telling the same story to people.

The most recent was seeing a man with a sign with something like “no games, just hungry” as I was pulling into a mall area. After I finished my shopping I gathered some snacks I had in my car I had for my son to give to him. When I pulled up to the light I rolled down my window and asked him if he would like them. He instead grummbled he didn’t want “…no childrens’ snacks!” I felt so guilty that I wanted to help him but instead insulted him.

I resent that I must try and figure out if a person is asking for money to use it to help themselves get out or their situation or just perpetuate and dull the pain. After the first incident I used to buy a Streetwise publication whenever I saw a person selling one but you don’t see that here in the suburbs. Most disturbingly now I see women holding babies outside post offices or whole families of four or more hanging out in supermarket parking lots asking for money 🙁

I cam completely empathize Serena and thanks for posting. It is hard when you don’t know if the money you give is actually going to help or hinder-if it’s going to something other than food, or shelter, or even to pay an electricity bill. It must be really confronting when you are running across families and babies like that. That is exactly when I want to know, where are local governments and state governments putting their resources? I’d rather know that in my taxes, some of that was going into really good programs/services to help get people, regardless of circumstance, off the street, toward healing, or homes, or whatever. That means a healthier town, a healthier, sustainable society. Instead, it just doesn’t seem to happen that way.