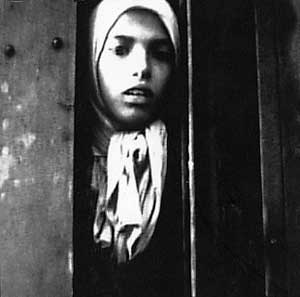 This is only a brief post to commemorate the liberation of human beings from  Auschwitz concentration camp on January 27, 1944. Seventy years ago.

The image above is young Dutch Romani girl, Anna Maria ‘Settela’ Steinbach. Settela was only nine and a half when she was gassed at Auschwitz on July 31, 1944. She was beautiful and was one of over one million men, women and children, mostly Jews, murdered at the camp.

This image is a still from a  film, made by Jewish prisoner, Rudolf Breslauer. Rudolf was ordered to document the scene, and he turned his camera on a gap in a boxcar door,  departing to transport Settela and 244 other Romani prisoners from Westerbork to Auschwitz.

He caught the face of this young girl, empty and anxious, among the activity of on the platform. There is something tremendously sad and sinister in the brief conversations before the doors are locked. We know what will happen.

Settela was identified in 1994 by a fellow prisoner and Auschwitz survivor, Crasa Wagner.

We all know about the Holocaust, but I felt I needed to learn more, and took the chance when visiting a friend in DC a few years ago. I spent two consecutive afternoons at the Holocaust Museum, and left, feeling more informed but hopelessly ignorant as to the depth of horror those people endured in the camps.

The Holocaust Museum is largely about the persecution of the Jewish people throughout Europe and the subsequent mass genocide. But there are also exhibitions of the ongoing and historic genocides that have occurred and are still occurring today.

Where we should have learned after the atrocities, we seem to be gaining little ground, by robbing lives, robbing dignity, prohibiting education, religion, basic freedoms and human rights. Within less than a lifetime, there is this legacy of the Holocaust and yet, we are no better.

That’s difficult to look at. My grandparents on both sides endured the war and have horrific stories to tell. It always makes it very confronting when I view images like that.

adminreply
– In reply to: Irena

Ross’ father was a POW for years, and held across the river from Auschwitz. He said they could see the lights at night but nobody knew what was going on. I think we should all continue to remember what happened-to know what we are capable of. To honor those who endured the horror of those years, and those who were unable to survive.

The Holocaus Museum is one of my favorite museums. I have been there a number of times. Makes you wonder where that kind of hate comes from.