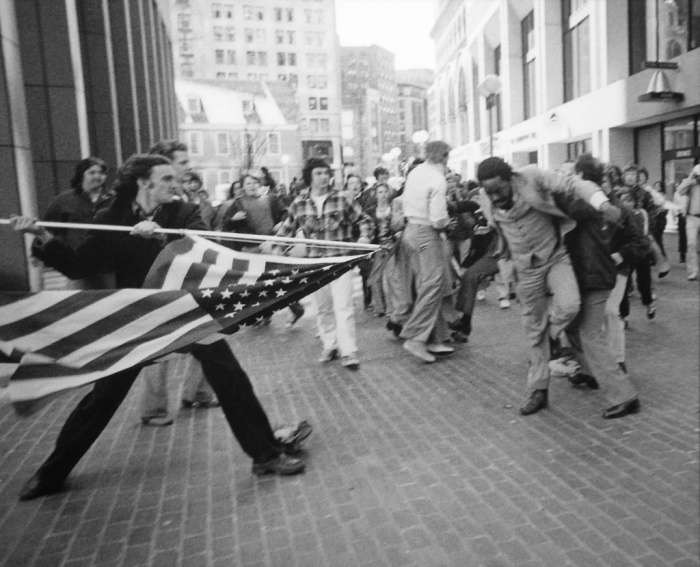 I need to start out by saying, I think there is a pitfall in being a white person and writing an essay about race. Some may tackle the issue to absolve themselves of their white guilt, at least in public eyes.

But as a white woman in today’s climate, I have to ask the question: I am a racist? Am I not? What is a racist in terms of 2015, which is just days away? I feel these are realistic questions as so many policies and global attitudes are driven by our racial tendencies.

This essay was inspired after reading several articles discussing race in America since the killing of Michael Brown, and subsequent deaths at the hands and guns of police.

There seems to be a renewed recognition that racism and anti-culturalism is alive and well in America, as it is across the world. It is evident in war-torn nations, first world societies and right here in my local community. As if anybody could ever doubt it.

Just because white people want to feel egalitarian, does not mean the damaging perspective is not real and pervasive.

There seems to be an atmosphere of renewed guilt in many white Americans about the stasis of civil rights, but despite the calls for social reform, the headlines also don’t point at unchanging white attitudes toward people of color that white folks would choose not to sit beside on a bus, hire for a position, live next door to, strike up a friendship with, want their daughters to date or their sons to marry. It’s a very long list.

In any event, we are again looking at the inequities in society. Though there have been grave injustices all along, the powder keg of Ferguson has brought it back into the mainstream media and our conversations.

In many ways, this imbalance is played out from the streets to the classrooms, to health care, social services or the boardrooms of corporations. We are also racist in our preconceived ideas, even when they are positive, making ignorant assumptions about people outside our experience.

But this is not an essay on wrongs against me.

If I have a racial streak in me, how do I atone for that? Do I become an activist for the rights of others? Do I then carry a placard and march, or doorstep about civil rights? Is that even appropriate as a white woman when I cannot understand the non-white experience in a predominantly white society? What gives me that right?

Or do I merely treat everybody, regardless of color or creed, as I would like to be treated? That sounds so righteous. But is it?

Do I even have to change my current habits to be a better person?

I am white. I can do nothing about the color of my skin, so I can’t become non-white in solidarity with the oppressed or the wronged. And as I am a multi-generational American, I first identify as female, white American from the Chicago area. Those are the parameters of my cultural identity.

Most of my ancestors came from Ireland and England to the US in the late 19th Century,  and made their way in northern cities. There is a bit of German and Bohemian in me, but where that comes in is hard to identify, though obviously my last name had foundations in eastern Europe. Other surnames in my immediate family tree are Martin, Harney, Quinn (formerly O’Quinn) and Hartwig (there’s the German).

So I can’t really claim a culture. I have never been to Ireland and though I lived off and on in Scotland for a few years, there was no calling to kin across the sea. Maybe if I went back to sources from my family tree; Counties Clare, Tipperary or Limerick for example, where some of my family hails, I might see people with my facial characteristics.

I don’t know that I identify with all white people automatically, though if I was the only white person in a town, or a country, and saw another white person, I suppose that might trigger something in me. I have never been in that situation.

I appreciate many people of color have been in that situation: the only Vietnamese girl in class; the only black person in a shop; the Indian woman who marries into an all-white family; the only indigenous employee; the only Syrian on a plane. It is not a situation I can yet appreciate since I’ve spent all my life in predominantly white countries.

Once I was on a night street in Glasgow with an ex, and a drunk woman started hollering at me to go back to England. She was pretty angry and I got angry, but my ex hurried me on. It was the only time in my life that I have been abused, albeit briefly, for how I looked. Though she didn’t even have it right, I felt angrily indignant and upset.

So I can’t change my environment. Moving to Kenya or Kabul won’t change the racially-charged situations back home.

When I look around me, I believe it would be ridiculous for me to say I look past the color of a person’s skin. Maybe it means I am a racist because I do see color.

For me firstly, color means: where did you come from? It inspires that question in me. It means evolution and mass migration. How did our environment determine how we look? We all began in Africa. That is my belief. And then somebody decided to travel. For whatever reason. We’re still travelling.

As our journeys took us around the globe and we were hit by ice ages, dark ages, heat and environment, our skin color adapted, our eye shape changed, facial features, body type, our hunting and survival habits evolved, and this is what I believe. We are Darwinism to a grand and historic scale.

Does it make me racist to believe we are a world of race? That we have adapted over millions of years to our habitats, and then moved again, to pillage, or to populate? I don’t have the answer to that.

I also recognize cultural affiliation. If a person identifies to me as Korean, as Australian Aboriginal, Armenian, South Sudanese or Fijian, I recognize that. And those labels are also generalizations, omitting tribes, towns, regions and religions.

Once a person chooses to divulge their heritage, not to acknowledge that, in my eyes, would be an insult. Because if a person shares their identity with me, that culture is likely to be embedded in their upbringing. For that person, it is part of who they are.

If I am wrong, that is my fault, but I know there is often a pride in your roots and where you came from. It is my responsibility as a person outside that culture to be respectful of another’s ancestry.

So in recognizing that the person I am talking has either a strong tie to this land as an indigenous person, a strong tie to culture as an immigrant, or a strong tie to history as in the case of African or Native Americans, just as examples, is that enough to make me less racist, if I am racist?

Addressing the wrongs of racial prejudice has a very long history, but in my own case, what do I need to do to become a better person toward anybody who does not look like me, or from another place?

So I meet a non-white, and I am white. What do I do? And I had a think and writing this, I was surprised at my immediate thought.

And this is where that dicey thing about proclamations comes up. The first thing that occurred to me, is when I speak to anybody, of any color, anywhere, I to try to establish a line of communication. It helps me, because I am dead shy and desperate to begin a conversation. I am not sure where this came from. A deficiency in my own self-confidence, I suppose.

I get so nervous that I often get a knot in my gut when I have to talk to any new people and they could be from Mars or Milwaukee. Color doesn’t seem to come into it.

Most people don’t know that, but maybe a few have sussed it out with my hearty banter or friendliness. It is genuine, but it also helps me out.

I realize that before race, before country or religion, the first thing I think is, “Whoa, a person I do not know, and I have to get to know them. What’s the best way forward?”

Sometimes I feel ill-equipped to talk to a person outside my experience of life. And that can mean color or culture or language. I feel ignorant, and I tend to ask too many questions.  I want to leave behind a good impression to leave the door open. I wonder if this means I have a degree of racism. I note the differences.

I find once I meet somebody, then the nerves evaporate, and I am fortunate to have met so many different people I can call friends or good acquaintances.  But no matter, white or non-white, I am grateful when somebody shares a story with me. I am learning all the time.

So am I a racist? I still don’t know. I despise acts that disallow anybody to have equal rights. I feel despair that we are so advanced as a species, yet so hateful toward each other.

I figure, I am awkward and naive about so many things. Far be it that I should presume to know about anybody else’s life, or their experience.

I have been lucky. My job as I am on this planet until I turn to dust is listen, and learn. I don’t know that it’s my thing to carry a placard, not yet, but maybe I can overcome prejudices in me if they exist, or in my environment by being a human before I am white, carry it out in my actions, and embed that dogma in what I do and how I work and live.

– The headline image is titled The Soiling of Old Glory. Taken for the Boston Herald American by Stanley Forman, the image depicts Joseph Rakes, attempting an assault against Ted Landsmark, a lawer and civil-rights activist, with an American flag. The image dates from April 5, 1976. The event occurred during protests ignited by court-ordered desegregation busing.