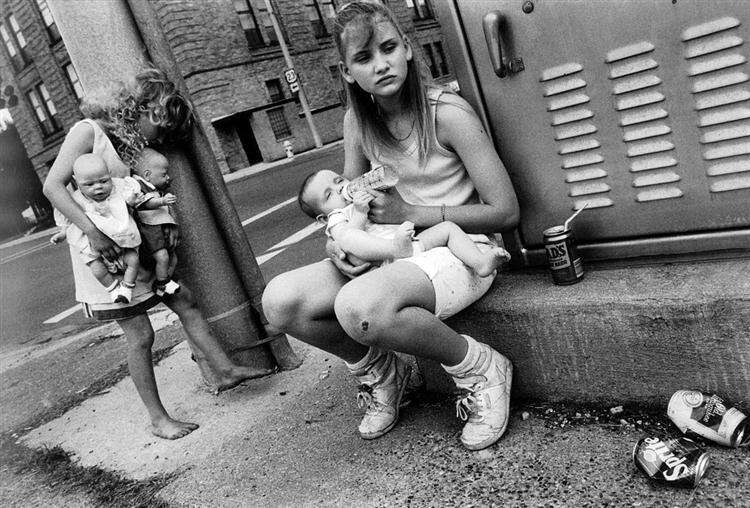 Over 30 years ago, my friend Alec and I crossed the former grassy plain that was the Dominican Priory, and walked up to a movie theater on North Avenue to see a controversial film called Streetwise.

The kids were just about our age back then, but living very different world to our middle-class, stable lives, with homes and beds of our own, refrigerators of food and somebody in our lives who cared.

The film was troubling. There was a filmy pane of glass between me and that life. The turn of a door, the twist of luck, and everything might change. I knew schoolmates and even friends who seemed to play a more dangerous game than me, frightened it might send one of us to the other side of the glass.

It was a scary gambit, and Streetwise made a life-long impression on me. I saw Larry Clark’s Kids about 10 years later, a visually and topically more shocking film, and maybe it was timing, but it did not stay with me as powerfully as those Seattle street kids.

These days, the normality of the danger is no longer confined to the fringes, or the ‘burn-outs’, of high schools. The earnest, the bookworms, the class stars, or in other words, the kids you’d never predict might fall victim to a Photoshopped nude image distributed as a cruel intention.

A topless shot taken by one of those girls might be sent to a cajoling boy in class, consensual in a way that consents to something the young girl probably doesn’t understand.

I spoke to several teen-aged girls recently, the same age as I was all those years ago, and they talked frankly about the seduction of social media, the reality of sexting in high school, the danger of losing control of your image and reputation.

And I was glad my teen-aged self didn’t have to deal with all those complications, because being a teenager was hard enough.

But I did know about sex. Of course I did. We all did. I did not choose to engage. Not until several years later. But a lot of kids did. As they always have.

The thoughts have been triggered by a the tail end of a conversation on the Drum, a panel program on our public media network, the ABC. The topic was sexting.

“That education is not meeting the needs of a modern generation of young people trying to express themselves, trying to learn about what is safe sex, what is sexual empowerment in a safe space,” NSW Youth Action CEO Katie Acheson said in the ABC interview.

“And so we have about 43 per cent of young people saying that they feel like it’s inadequate for them.”

Really? I’d ask the question, is it sex education that’s inadequate, or is it something else? Do these kids understand where the deficit really lies? Because I think kids get sexual empowerment – they’re embedded in the culture of on-line exploitation in ways we adults can’t comprehend.

And that’s far from a safe space. We can’t go back there again.

Far as I know, sex is sex. Whether you exploit it on the street, the television, film, or the internet, the rules of sex, urges, hormones, pornography, rape, it’s about as old as old can be. Prehistoric, in fact.

So is sexual abuse.

What we are lacking is some platform, some foundation for all kids, to believe in themselves. For the moments they back away from the exploitation, they have strength at their feet.

I would argue it’s not sexual education our kids need, because kids I’ve spoken to, they get sex. They get it that the more skin, the more allure, the more you will get attention. Attention can lead to a lot of things, including feeling wanted, secure, cared-for, attractive, accepted, and many boys and girls will do a lot to get it.

Teenaged pregnancies, making regretful decisions, being the brunt of mockery and bullying, all those things, again, nothing new, and young people navigate the new platforms of sexuality better than we can. They will blind us with their understanding.

But our experience is something that can be shared.

We can teach our kids is how to stand though the storm. We can put that message out in programs, or classes or opportunities that teach them they will survive. That they have a value, they have something to contribute.

Tiny, in Streetwise, was not an adult trapped in the body of a child prostitute, but a child trapped in a mind that felt she had no worth except to a few other kids who fought to survive on the street. She got sex. No adult had to teach that to her, but what no adult gave her was a sense of her real worth in the world, not the dollars she made turning tricks or giving blow or hand jobs.

Instead, they turned their backs.

If the world had stepped up for Tiny, and all the kids, at luck’s end or cashed up and neglected, or confused, those kids who fail to believe they are as precious as they really are, maybe they would have found a better life.

It pisses me off we underestimate how smart our kids are today. They don’t need our preaching. They need our belief in them and our example. But I guess that means we need to be better, too. And maybe, that’s just too hard.

So maybe, we need to stop feeling so shocked at what kids do today. As adults, are we not just as shocking?

-The featured image is by Mary Ellen Mark, date unknown.