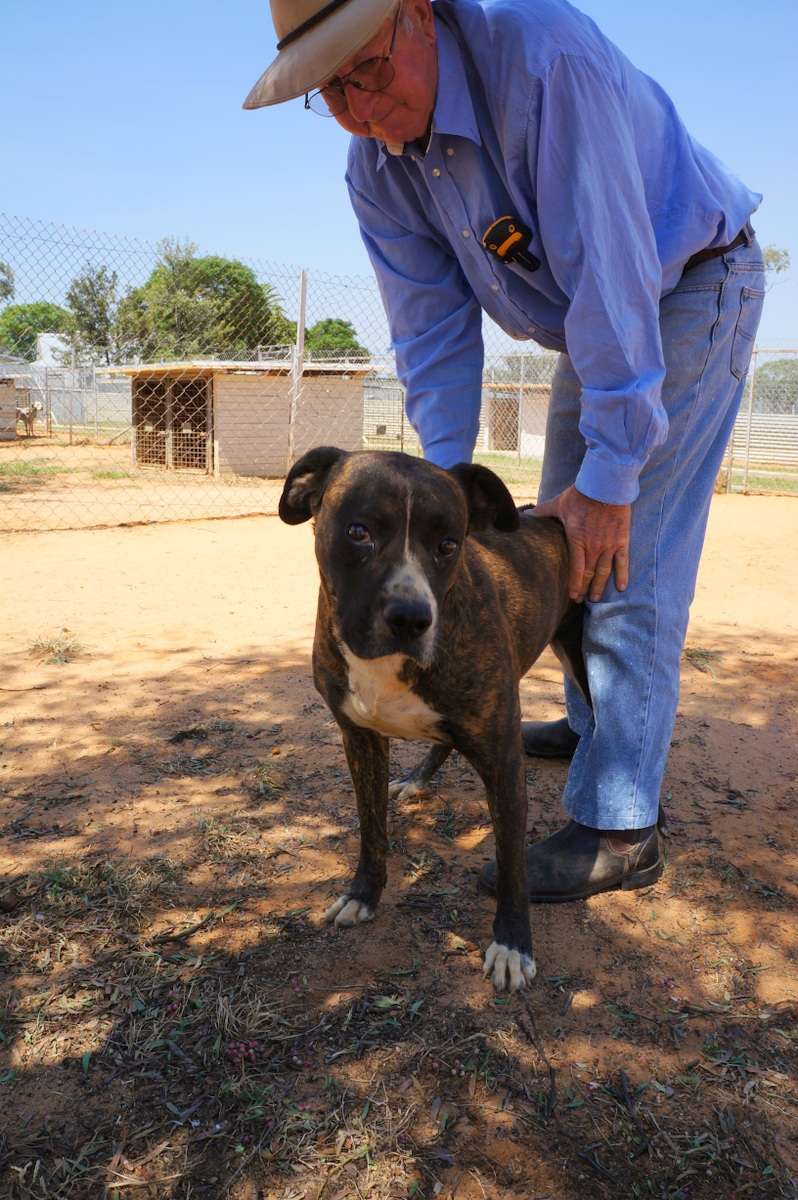 I asked Geoff, “will she be ok if I go in there?” as we approached the yard of a large Boxer cross named Maggie. She was sitting in the shade beside her kennel, head quizzically tipped to one side, just a little. Geoff assured me she would be fine, but would want to check me out.

He opened the gate, and she got up and came over with an enthusiastic greeting. I followed him in.

“We’ll have to cut her back on her food,” Geoff said teasingly to his partner Pat as the well-padded, healthy dog wagged her way around him, snuffling. Then she came over to me and I patted her sleek coat and talked to her, but my words likely came to nothing as Maggie is deaf,  from a bullet still lodged in her skull.

I had seen Maggie before on a previous visit. She’s a young, large, athletic dog, but more sedentary than other dogs with her ability. Geoff and Pat had given me a little of her story, but when I returned to gather some of the animals’ stories, I was interested to learn more.

Geoff Johnson and Pat Carmody are the founders of Gwydir Park Refuge just west of Delungra, NSW and not far from my home. The pair live and work all day, every day and have done for a very long time. It’s a no-kill kennel that subsidizes the cost of the 100 or so refugee animals by boarding pets, grooming and generous donations both local and interstate. The refuge homes mostly dogs, with a few cats, with a second designated refuge just for cats.

Many are adopted out, but several are too old or too damaged, and will live their days out with the pair.

Last weekend, I sat down with them to hear Maggie’s story before we headed down to see her.

“She has no sense of smell, deaf as a beetle and blind in one eye,” Geoff said.

Maggie has been a Gwydir Park refugee for about 12 months. Geoff and Pat became acquainted with the dog when she turned up on a farmer’s property not far away.

“He didn’t know it was shot. He brought it in, and said, ‘This dog’s hanging around my property, it’s that poor it can hardly stand up,’ and it was that poor,” Pat said.

“He said, ‘Can you scan this thing and see who owns it?’

“It had sort of a big bloody patch, dried blood down one side of its face.”

Geoff said they first thought the dog had been rolling in road kill. Pat scanned it for a microchip without result.

“And I ran my hand over its head where this bit of, I thought was mud, and I realised it was dried blood and I could actually feel the bullet,” she said.

The bullet can’t be taken out. It has penetrated her skull and Geoff and Pat have determined the extent of her disability.

“It’s affected the brain sightly. That’s why she holds her head to one side all the time,” Pat explained.

“But on one side is deaf, and one eye, it can’t see out of one eye, so they tell me, and she has very, very limited sense of smell. So it’s affected the central system of the brain.”

Maggie sometimes startles people when they walk down the grassy pathway with a dog. She will come charging at the fence barking, but Geoff and Pat said it’s likely she can’t hear herself making all the racket. It’s all show.

“She’s a lovely dog. She’s as friendly as all get,” Pat said.

“I don’t think she realizes she’s making that much noise because she can’t hear herself.”

Maggie lives in a very large yard with a shade tree and kennel when she’s not out exercising. I wanted a photo of her, and when she wandered back to Geoff, I circled the space and knelt down to get a ground level shot as Geoff patted her.

I was not too successful. The best I could do was a photo of Maggie wiggling toward me. Then it was all doggy breath, snuffles and she buried her head into me. I was left with the choice of trying to get a good picture, or cuddling this very affectionate dog. I cuddled.

“Eventually, I will find a person that is particularly interested in her, and will put up with all those problems that she’s got,” Pat said.

“But that’s where the problem comes. You’ve got to find the person that’s prepared to put up with all of the problems.”

Maggie is not the first shooting victim Geoff and Pat have received. A few years ago, they had a Collie-cross that came to them, critically injured but survived. They eventually gave him the tongue-in-cheek name, Target.

Target was shot in the head as a pup on Christmas Eve. There were two wounds, one a bullet that missed, but the other found its target. He was brought in with a noose around his neck, and covered in blood. After rehabilitation and medical care, they found him a home with a loving owner.

“That’s why we have a no-kill policy,” Pat said about Maggie.

“Because eventually, with a young enough dog, well, she’s only a young dog, she wouldn’t be any more than two now, you’re going to find that one person that really bonds with that dog and is really suited with that dog, with all her faults.

“There’s a home for everyone, somewhere,” Geoff said.

“There is a person for every dog, it’s just trying to find the right person. Now if you have a euthanasia policy,” Pat began.

“She would be dead,” Geoff finished.

“You’d never find that person in that short of time,” Pat added.

Stop by for more Gwydir Park stories. Click here for more about Geoff and Pat. To find out about worthy dogs who need that special owner, you can phone Gwydir Park Refuge on (61) 02 6724 8580.

These people are saints and the definition of humanity. I am so glad that you profiled them and are sharing these stories. If I showed up at their place I might never want to leave 🙂

adminreply
– In reply to: Jennifer

Thanks for reading Jennifer. I knew you’d like these stories.