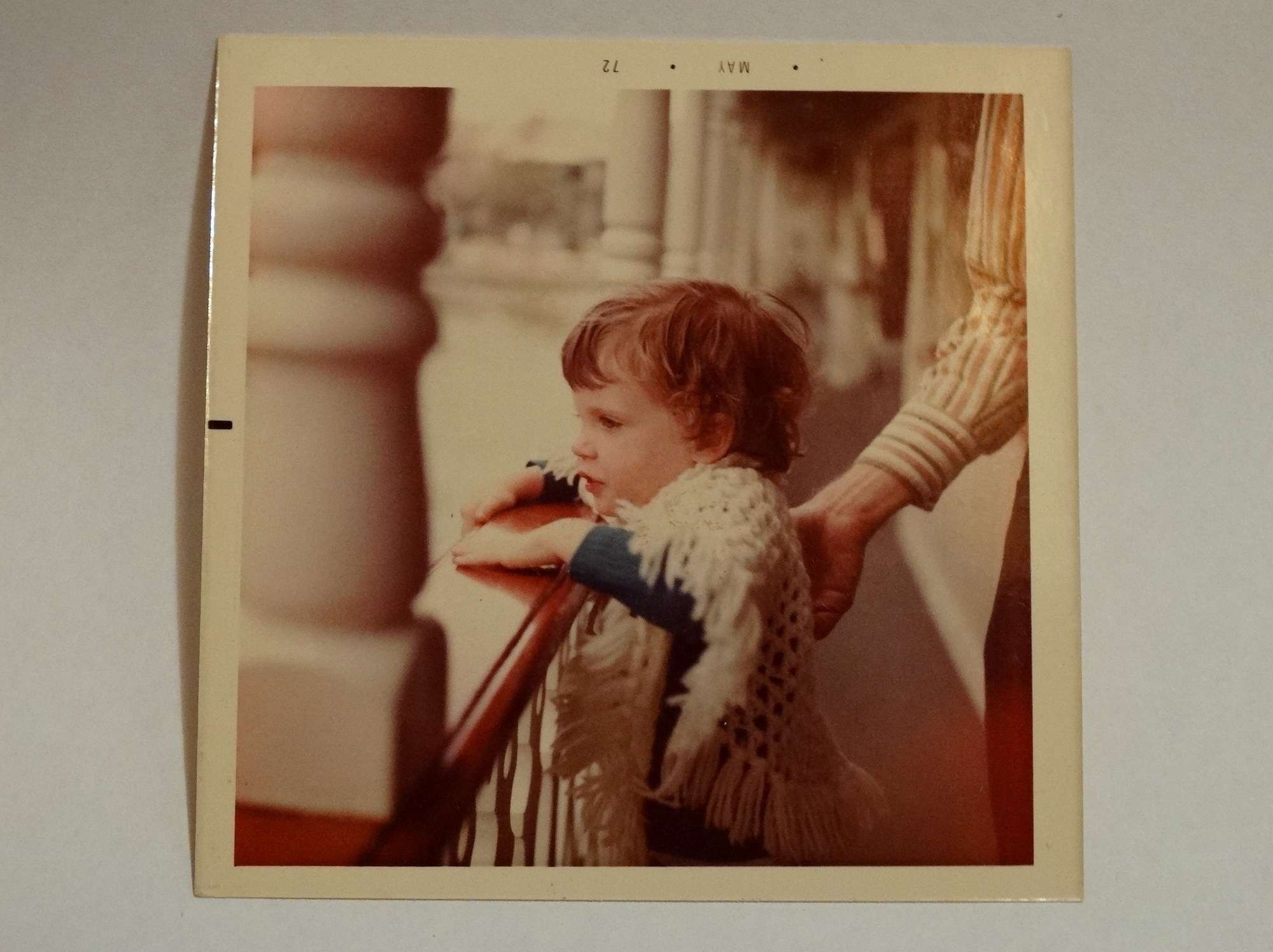 I read two thought-provoking articles in Dame magazine in the past week on very different topics. One was about the freedom of childhood, now often denied by over-vigilant parents. The other was about women striking that mid-life crisis phase. The two pieces seemed relevant to me, because I have been reflecting on my past as well as considering where I am today.

As far as kids, I don’t have any. Sometimes I feel wistful, wishing my husband and I might adopt a child or two for many reasons. Some selfish, but most with the intent to give a young person a family. Then I sober up and realize that really, there is an innately non-maternal, ultimately selfish kernel in me and I have respected that feeling. That’s not to say if the opportunity arose, I wouldn’t embrace it, but for the moment, I’m ok.

I bring up the children, because without one of my own, it’s not really fair to pass judgement on parents who hover. But as a child who was far from overprotected, I think there is a lot to say for encouraging resilience and letting a kid fall and endure a dousing of Bactine or a trip to the ER for a few bristly black stitches in the chin.

Last year I visited a friend in DC, and we passed a gated play area for little kids. There were more adults crowded into that tiny space than children. The kids could hardly get up a head of steam on the miniature slide before they were caught by four concerned parental arms.

Made me recall grades 1 and 2 at St Giles School, where we swung as high as possible on the tall steel swingset and flung ourselves off at its highest point to sail through the air and land on softer snow, but more often, the hard concrete below.

May I add, with adult supervision.

Kate Tuttle, the author of the Dame article, I Agree With ‘America’s Worst Mom’ (http://bit.ly/1z56fUt) writes about the Maryland mother who has been under harsh scrutiny when she allowed her six and ten year old to walk home a park, and a second mother in South Carolina who left her nine-year-old to play in a nearby park while she worked her shift at McDonald’s. That mother was arrested and her child was temporarily removed from her mother’s custody.

The inanity is really beyond description, and in the SC mom’s case, raises a lot of questions about how we care for low-income parents trying to do the right thing for their children. But that’s another diatribe.

Tuttle’s article resonated because I was a consciously defiant child. With two non-hovering parents, I felt free to be responsible for myself, and independent. While I admit, I had the security of knowing my mother was within a few blocks or miles in an emergency, good luck getting me home for dinner or when the streetlights flicked on. When other children hollered “Coming!” at the bellow of a parent, I yelled “What?”

I was a wanderer before the age of six, regularly making solitary excursions away from our apartment building, crossing busy streets, curious.

In the current environment, my parents would be well and truly screwed, and when I did get caught that fateful day, I was made to sit in a corner which was so out of character for my mother, I think it made an impression. She must have beside herself.

I don’t know if the world is more dangerous today, than in the 70s and early 80s when I was of snatchable age. Considering the insanity of non-licensed or open carry, armed idiots, I suppose even the warm, protective body of a parent isn’t going to protect you in a pinch. Especially when the threat is in a school; probably the safest place to be when I was a child. Kid lost? First thing you establish-did she get to school?

I can’t thank my mom and dad enough for that perhaps, inadvertent parenting approach, because I feel, for me, it gave me self-confidence in all my childhood scrapes, bouts with bullying and beyond.

Anyhow, I was an incurable explorer as a youth, and those roots are established in my middle 40s. Lately, I have been contemplating how my independence as a child has affected how I am looking ahead to the next half of my life.

So on comes that mid-life crisis. Where are the fissures running through my life?

Well, there is health and the body. I have an old friend and we seem exchange our physical maladies more and more over the phone. I think we both need to do that. It feels like a validation that yes, we do have problems, but there is a small shimmer of confidence that the years are still on our side. My hip might be a little shot, her knees might be wrecked, but we can still walk ten miles.

But it annoys me. I don’t want some pesky health issue affecting my freedom. I have always been a dedicated walker, and my right foot is giving me grief when I roll off my toes. I have had x-rays without any result. My husband says, “go to a podiatrist” but I feel annoyed that if it isn’t broken, it needs to get with the program and quit getting on my nerves. I have things to do; places to go.

Then there is a career. Somewhere on this web site is the litany of my employment history, and I feel like I am always starting over. Optimistically, perhaps all the lives I’ve led up until now has led me to my current work. Who can know? In one respect, I feel relieved I have had to reinvent myself so often, because it means the insecurity of life doesn’t seem so insecure. So at 45, I know I can take on about any job and make a living.

So long as I’ve got my health…

Putting the pieces together, I wonder if the second half of my life has prompted this web site. In that second Dame article “I Think I May Be Having a Mid-Life Crisis”, (http://bit.ly/1Cufdgp), author Jordan E. Rosenfeld makes the point that as we age, we often crave to make our mark. It could be a form of finding myself, this process of public self-examination, I don’t know.

What I do know is that I feel as though I have something to say. Never one to join a debating team or become a young activist, in my mid-40s, I feel that the world means more to me than it has before, and moves me to rage a little, whine a little, maybe capture its beauty around me or despair at our ugliness.

So I am giving it a voice, trying to care less about what people think. If not now, then when?

In any case. I am aware things are not as they were five years ago and won’t be again in another five. It’s a little scary and a little exciting, too. Either way, for the moment, mortality seems ages away, and that small child in me resents anything that causes me to come off the streets too early.

-Headline photo is me, aged two at Disneyworld with my dad’s protective hand at my back. I think I wore a harness and leash for much of that trip to restrict my wandering. I have very vague memories of that time, but I empathize with that long gaze. I have it still.

Your writing inspires me to be more fully myself. Sometimes it inspires me to want to write a big story, it’s just a want, I’m a poor writer in the scheme of things. I’m a poor photographer too. Painting is the place I enjoy getting lost in. I just wanted to tell you that, the first sentence, and I hope more and more people get reading you.

adminreply
– In reply to: Nicky Gilkison

Thanks for writing and sharing your kind and personal thoughts Nicky. Get it out there somehow. That’s what I figure. No time like today.

Nicky Gilkisonreply
– In reply to: admin

‘Tis all we got! Cheers.

Beautifully written, Michele. I think you did rather well in your last careers, but you might have yet another to add to your resume. It does run in the family!
I, too, wandered as a child, riding my bike all over Chicago. As the oldest of three, I guess my Mom thought I could handle it. I continued to wander as an adult and still love visiting a place I have never been. As your Aunt, I guess that runs in your/our family, too.
Interestingly enough, we also dovetail regarding kids. Although I always loved kids, you were one of my favorites, I always felt I would be too tied down with kids…too afraid my wandering would end. But at a little older than you are now, I changed my mind and adopted my daughter. Best thing I ever did. Have to think maybe I had my full of independence or maybe my love of kids finally trumped my selfishness. In any case, it was a good decision.
As for your health, things don’t get messy until 70 or so. And it is not til 80, that things begin to go. Yet, my Mom lived til 92 and had two sisters who lived til 100 and 102 respectively. So good genes there, as well.
My thoughts and love are with you as you continue your journey. Do us proud.
Your Aunt Judy