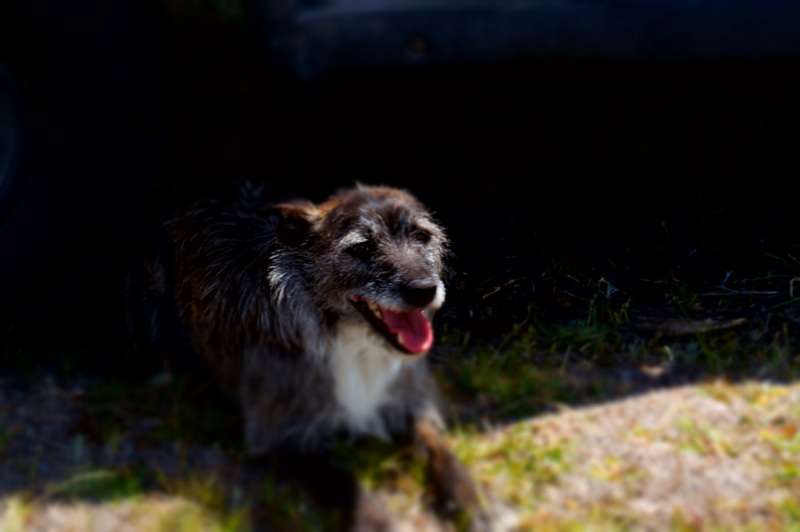 We have a dog named Spud. When we adopted him in 2011, we were going to call him Suds because he was so bubbly. But I kept calling him Spud by accident. He might even have thought his name was “Spud, I mean Suds”, but when I finally trained myself to call him Suds, he was coming to Spud.

So that’s his name.

Spud and I have a relationship that daily tests my patience. I need to say he is the perfect dog. Smart, sensitive, tries hard, incredibly kind, a good size and he doesn’t shed. Spud could be the kindest dog I will ever meet. I often feel like I am shortchanging myself for not being more cuddly with him, but I have my reasons for keeping him at arm’s length.

I often wish my husband had been the one to hold him for the 15 minute drive to the house from Gwydir Park kennels, the no-kill refuge up the road, because if he had, maybe Spud would be bonded to him like a serial stalker instead of me.

But it didn’t happen that way. Instead, I am the center of the world for this rag-tag, mishmash of a dog. I think he might be an Cairn Terrier crossed with a Kelpie. The folks at the refuge thought someone was trying to make a miniature Irish Wolfhound. He has that really rough, coarse hair that stands up like most 14-year-old boys wish they could achieve without the product.

They very affectionately called him Fugly. One of the refuge owners told me that as he cuddled Spud in his arms while the dog was intently licking every exposed bit of his skin.

Anyhow. For a couple of years, every move I made, I was shadowed by Spud. Not that “Oh, you’ve moved so I better get up, follow you and flop in the general vicinity” kind of shadow, like a roly-poly Labrador. Instead, I figure his thought processes are a little like this:

Spud: “She’s moving! No, just shifting, but she might move…NO NO! She is moving! Tension, tension… might have to move, too to see where so…oh, just reaching for her coffee. WAIT! She is definitely, rising…leaving the couch and heading WHERE?! Must follow…tension, half-way to my feet, anxious-she is going to the little room!”

Me (heading for the bathroom): “Lay down.”

Spud: “My universe is imploding! Must crane my neck, oh she’s shutting the little room door, I’ll creep across the kitchen just to make sure-yes, she is in there. I hear sounds! Wait. It’s quiet! WHERE IS SHE!??”

Me (coming out of the bathroom and seeing he has moved from where I asked him to lay down and pointing to his bed): “Go lay down.”

Spud: “She lives! Now I’m in trouble, but where is she going now…?”

Not weeks, not months, but years. Frankly, it was suffocating. No matter where I went, there he was keeping his anxious eyes on me. If I told him to lay or stay, it was wasted since the request lasted for all of a moment before his desperation got the better of him to see where I had gone. His anxiety fairly leaked out, forming little vibrating puddles on the floor.

Got to say, I am an animal lover. Having a dog is a necessity. I used to have far, far too many cats when I was home in the US, but now I am wiser and have only one. We have two dogs, Spud and Snazzy who I chose at five weeks and took home at ten. The two dogs are tailor-made for each other, but at 15, Snazzy is getting a little fragile in the face of Spud’s boundless enthusiastic energy.

When he leaps off the porch for a ball, he can’t just leap. He has to do some gymnastic flippy thing skateboarders do at the top of a half-pipe. Spud has a steak of exhibitionism. But he can’t catch a toy in his mouth worth shit. He still tries to do that scissors-thing with his front paws.

Having worked with problem horses for many years, I understand that Spud has issues. He was turned into the refuge, when he was about six weeks old having tumbled out of some grass and surprising a truck driver who stopped to have some lunch. We adopted him at 18 months. Though the refuge owners are exceptional and he had a big yard of his own and buddies to play with daily, he was institutionalized and not well socialized in terms of a pack.

So I get the anxiety. And I also get that, even when he gets bawled at to lay down or stay, he will keep getting up again and again. Or jumps out of the car window when I’m picking up horse feed because I am out of his sight for moment. I mean, that’s not safe. I cannot trust him not to try to locate where I have gone.

He is kind of like the kid who does bad things because any attention is better than no attention at all. he is the dog that loves too much, most of the time.

Balanced with that is our walk or bike routine when he goes out for his trek with me. I admit, I feel pretty good to see how happy he is when he knows it is time to go for our outing. This despite the fact that we live on 150 acres, that he could run around as much as he likes, but those ventures out are special for him and I’m glad he enjoys himself.

But for me? Nearly four years later, I still get cranky and he still tends to be my creepy stalker. But he has also reinforced my understanding that a dog has a boundless capacity to love and forgive. I should learn from him.

He teaches me little by little that I have to get over myself and just accept him for who he is. His fanaticism is mellowing, and my irritation isn’t so great. I should be happy I have a dog who would run through fire for me, I know.

I guess I still have a ways to go. We both do.