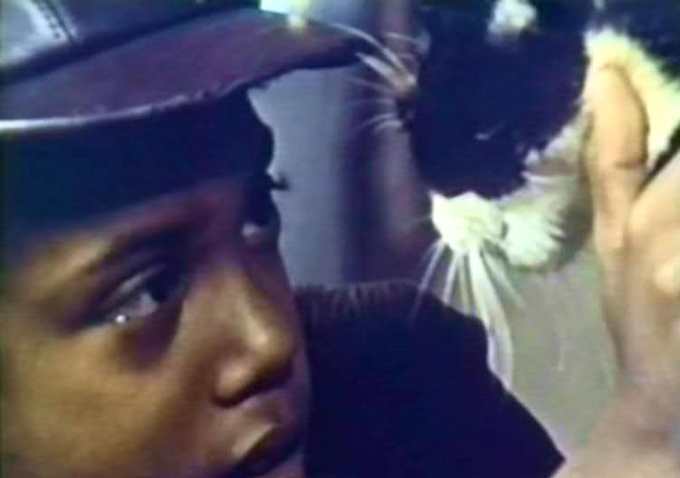 One 1970s afternoon in my early years at St Giles School, a film projector was wheeled into the classroom, and we saw a movie I have never forgotten.

I think we saw it more than once, much like The Velveteen Rabbit, and Free to be You and Me.

It was JT, a drama broadcast on the CBS Children’s Television Workshop on December 12, 1969, starring a then young Kevin Hooks as JT Gamble.

A couple years later, I owned the purple paperback with the story adapted by Jane Wagner and photos by Gordon Parks Jr, and it’s safe to say the story shaped part of how I think today.

The film begins with JT seeing a chance, and stealing a coveted transistor radio dangling from a sun visor of an open car window in his Harlem neighborhood. His theft is witnessed by a couple of street toughs, a little older than JT, and they remain a menace throughout the film.

A few days later, JT is pursued by these boys, and he takes refuge in a burned-out building. In the midst of his flight, he meets the very decrepit, black and white cat who changes JT’s life.

He names the cat Bones, and he becomes the cat’s stalwart protector.

JT proceeds to feed it cans of tuna he loads up on his mother’s credit line at the local mom and pop grocer. He builds the cat an elaborate home out of an old stove. That really affected me as a child. It made perfect sense. Still does.

He even takes time to fashion a tiny eye-patch for the cat, who is suffering, and gently places the patch over the Bones’ damaged eye.

I won’t spoil the story since it is all available on You Tube, but suffice it to say, the bullies on the street play a part, devastation ensues, and the movie is about redemption, the beauty of the human soul and the complications of how we may misinterpret intentions.

It was a powerful message for me to recall for all the decades since I have seen the film and read the book.

I bring this up, because I grieve for the desecration of humanity these days I see unfolding in the Shirley Jackson, Lottery-esque inanity of the Donald Trump rallies where people walk in humans, but soon are swept into a hysteria of hate.

How can this be? Every logical bone in my body refutes the concept that disdain, and racism, hatred and intolerance are the basis for any leader.

How do women in the crowd turn a blind eye to the misogyny Donald Trump is so famous for? That his flea-bitten financial history might serve as an inspiration to those seeking stabilization in the economy is ridiculous.

That his documented disrespect for people with disability or from other religions and cultures makes him eligible to be a president of a nation -it makes no sense.

That he has got so far is a dark stain on the integrity of the nation.

In JT, there is a moment when his teacher pleads with him to complete a 25 word essay on What does Christmas mean to me?

He is so distracted by the thought of Bones, cold, alone in his stove of a home in the wrecked building it consumes him and he runs from the classroom, leaving behind a crude sketch of his beloved cat who is all of what Christmas means for this young boy.

There is a degree of love and sensitivity in the film that is heartbreaking, and very real.

When we are humans alone, and see something or someone in need, we most often respond with a  whole heart. I think altruism is innate, but life and our lazy ignorance get in the way.

So this rhetoric of hate I see spewing from Donald Trump’s lips, and sucked up like a vanilla malt by the hoards about him, is light years from that stunning kindness and acceptance of which we are capable.

It causing a kind of rift that if it is not stopped, will resonate in his sympathizers’ children, and in our future.

Hatred is so much easier to spread than goodness, because it is simple to hate, and harder to be consciously selfless. Hate takes no real sacrifice and feeds from our innate greed.

It will live on in decisions made, in the bubbling adrenaline of anger that will spill out into every day life. It will hurt somebody.

There is a moment in JT when he in emotional pain. Comforted by his grandmother, Mama Melcy, she says, “But you, what about you? You just got one life to live. What’cha going to do with it?”

And I wonder about those people who look to be violent in those rallies, and express their contempt for those among them who are different, who choose to speak against this candidate’s ‘trumped-up’ ideology.

They are making a choice on how to spend that one life.

I wonder if they will look back to last week, or last year, or that day when they chose to turn on the person who seemed unfamiliar, or strange, or foreign beside them, and acted in hate or violence, and feel proud of that moment, those very ugly feelings.

Maybe so.  I despair to think it, but, maybe so.