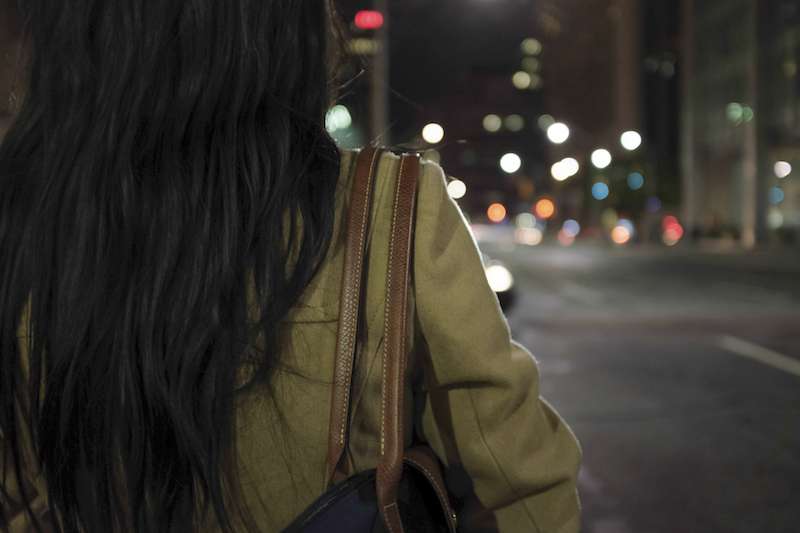 I heard a good one the other day.

A cat is out patrolling the street one night, and is raped. Afterwards, nobody asks: “Well, what was it doing walking alone? Didn’t it know better?”

Similarly, and more relateable, an 18-year-old boy is sexually assaulted by a gang of boys in an alley as he walks home. Nobody asks what he did to provoke the assault.

Women don’t merit that objectivity. We have to be careful.  People will ask after a woman is attacked, “Well, what was she doing walking home alone in the dark?”

And I ask, with anger, why is that even a question? Still, we are not safe. That is reality, and I’d be a fool not to feel grateful for this sixth sense of situational awareness that has so far kept me unmolested. So far.

That’s not to say I am skilled. It says I am fortunate. Two women who are closest to me have both been attacked on the street, and both are savvy city-dwellers.

The women, with few exceptions, look vulnerable. Like potential victims.

The images accompanying articles have titled like: Fear of Walking Alone at Night, Statistics, Safety tips for women, Two Thirds of Women Surveyed Report Being Sexually Harassed on the Street, and Apparently It’s Up to Us to Change That, What It’s Like As A Woman To Walk Alone At Night, or Companion: Tens of thousands using safety app that lets friends digitally walk you home at night.

We’re marked. No different than a victim marked by a bully, the majority of females are aware the other sex can be a danger. Physically or sexually, on a quiet lane or a busy street. Society has shaped our gender to be the prey. And yet, getting het up about it doesn’t help because as things stand, we cannot afford not to be aware.

This is a video which still haunts me. It is Irish journalist Jill Meagher who was kidnapped, brutally raped and murdered by a man named Adrian Bayley on September 22, 2012. Bayley had been in pursuit of her, and it is this moment, at about 1.50, he catches her up.

Jill, just left the safety of her tipsy friends, begging off from an offered ride, saying she could walk alone, down this busy Brunswick night street at about 2am. After harassing her in the pavement, Bayley pulled Jill into a nearby alley, where he raped and strangled her. Jill Meagher’s body was later found along a highway north of Melbourne.

People might say she made bad choices. Asked, “Why was she out so late?” As though women have to get indoors by a certain hour before danger takes to the street. Basically, that she should not have walked home alone.

I ask, why not? What did not keep her safe, but kept the men on that sidewalk safe? Because she had a vagina? Her bodily tissues were somehow the catalyst for Bayley to take out his frustrations or unresolved rage?

Did she get up that morning expecting she would be fatally assaulted because she was a woman and chose to walk home by herself?

I’m trying to find a way to explain no matter how unbowed I am by my gender, I still have a habit of just checking, an awareness of the dark street before me, that man walking on the other side of the road, the guy in the truck coming toward me. I have developed a way to move through the world to ensure I will be safe. Fear has nothing to do with it.

I can’t recall when I developed carefulness when I walked alone at night. Pavements and alleys lit by pools of streetlight have been my favorite places since I was child.

The night walks sustained me for over thirty years. I always had a dog, and that might be the reason I was left alone. More likely, I was just lucky.

And what would I do if something did happen? I remember a self-defense class taken by a friend. I attended her graduation day, and the students all had to run through a series of threats to earn their certificate.

It was a sadistic afternoon. To put the female students through their paces, they were grabbed from behind, from the front, attacked in bed and had to fight their way out of it.

The approach of this class was drop to the ground and kick out at the man. The instructor said, “Don’t worry if he laughs at you – your legs are your strongest limbs.” I have never forgotten that day, and sometimes think I would do that. I would yell as loudly as possible, or run. Could I gouge out his eyes with my thumbs? Am I strong enough to fight?

The bigger question might be – why should woman feel compelled to take a self-defense class at all?  But it is a decision we make to stay safe.

I don’t dwell, and I don’t feel fear, but the information is on file, ready to hand. Like riding a bike, it’s there if I need it. I don’t think my brother, my father, my husband, my male friends had this file, but I bet most of the females in my life have a file of their own.

Since I live alone half the year in a remote property, a family member asked why I wouldn’t own a gun to defend myself. Those reasons are based on my values and my rights. I abhor what a handgun represents, and I don’t believe owning a gun is right for me.

But I also don’t want the death of a person on my hands in response to a situation in which I had no part save my gender. I should have to kill somebody just because I was born female?

That blood. That unbleachable image.

I should not have to carry that guilt, that horrible memory for the rest of my life. I didn’t ask for that.