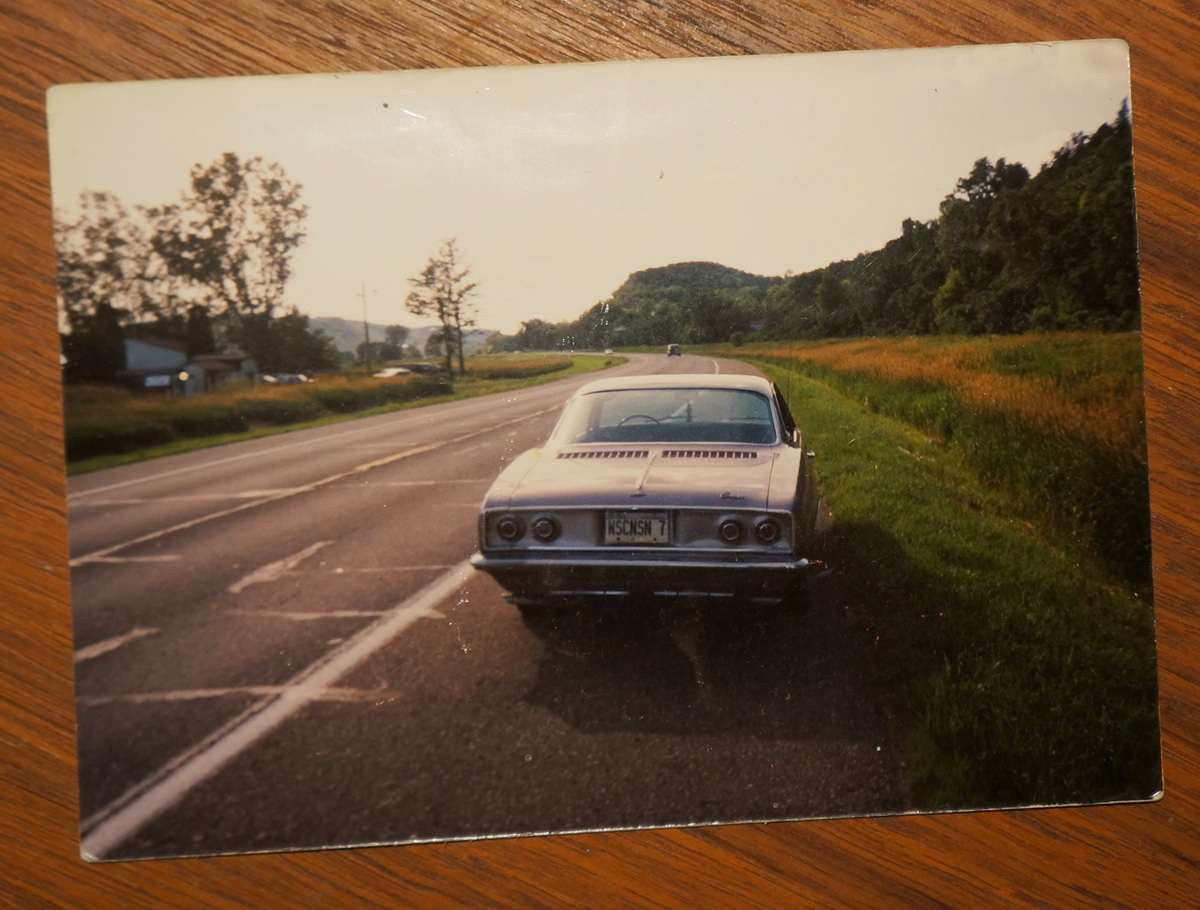 Night crickets shimmering outside my car in Idaho, the wind buffeting my tent in New Mexico at Angel Rock or mosquitoes pinging off the tent window in northern Minnesota. Gallons of gas station coffee long before Starbucks left Seattle. Memories of years of travelling alone.

I remember waking up across from a wall of mountains west of Cody, Wyoming several times, bathing in the icy pump water at five am so I could get into Yellowstone for free before the booths were manned, and get on to the Tetons.

Rolling on to a raft-ferry to cross a Tennessee river after seeing the awe-inspiring cooling towers of the TVA. Howard Finster’s garden in Georgia.

I will never forget my first trip across Nevada on route 50.

Wherever I was, there was a peace inside me, because that moment in the world, nobody knew where I was and the road kept unwinding before me.

It began when I was a very little girl in the early 1970s. Before I was five, I began making excursions from our Evanston apartment building, down the gangway, down the alley, around the corner and…

As I gained confidence, I snuck away with a girl named Laura who lived upstairs, but I admit, I led her astray. It was not her fault. We walked a block away to a park, complete with a big and little kids’ playgrounds. I was with Laura the day we were discovered and disgraced and that put paid to that park.

Other times, I crossed Sheridan Road, again alone, and visited Garden Park, a grassy spot with a play area along the lake. And then I must have found loose change here or there in the shag rug or in the couch, because I would cross South Boulevard and buy a bottle of Mr Pibb from the machine at the gas station.

I caught hell for that eventually. The day I was on my way back and there was my mother, charging down the block looking for me with justifiable murder in her eyes.

But those early journeys might have tapped into something that has dwelled within me ever since. My desire to roam.

A friend recently lent me the Cheryl Strayed bestseller, Wild, now a motion picture. I’m not sure what I feel about the book and in many ways feel critical of the memoir. It feels incomplete. Maybe too many young perspectives mixed with a mature hindsight. I’m not sure.

But I do empathize with some her adult reflections on those heady days of her adventure. I understand what it felt like to be that age and free.

In my own way, I have been adventuring for decades, though lately life seems to have quieted. To be honest, sometimes I feel trapped by this life of a full-time job, maturity, a property and many animals who depend upon me.

Nonetheless, I am only 45, and I feel – I hope –  that several chapters of travel lay in store for me.

From those early ventures, at age six, my family moved and I matured by walking all over my new neighborhood. I then found a new kind of freedom with a Schwinn Collegiate Sport 5 that was souped up and pedaled as far as I could go.

In 1985, life changed with the gift of a Gitane Criterium road bike I had been courting at the local cyclery for months. It was a massive gift from my parents who were not cashed up, and I was choked with tears on the morning of my 16th birthday. It was December, yet I rode it out that day on the snowy streets.

That blessed blue bike took me into the world of solo long distance cycling, and gave me wings. I rode in the heat, and the freezing cold, one time taking refuge in some suburban hospital entry to thaw out my fingers with 35 miles yet to get home and the temperature hovering at 20 degrees Fahrenheit. I could no longer feel my feet.

It was my 1965 Corvair Corsa that really changed the game plan in 1989. The day after I received the car, I was already putting miles on it. The car came with about 100,000 miles on the odometer. Its final journey was from Kansas up to Wyoming. The clutch cable broke on that memorable trip where I sat in the car up on a hoist, passing tools to an old mechanic through a hole in the floorboard as he jerry-rigged the cable to work the rest of my trip. A swansong repair

Those miles were the result of years of cross country trips that took me all across the western US, up north, down to the southeast, but it was the big states: Montana, North and South Dakota, Wyoming and Minnesota that called me time and time again.

Early on, Wisconsin stole my heart, and my Illinois plates. The tags read WSCNSN 7.

I’d pack up the car with clothes, toothbrush, towels, and head out for a couple weeks at a time. $200 in my wallet, an Amoco credit card freshly paid off, cheap K-mart tent and collection of blankets, boom box, extra batteries, books on tape and a bag of cassettes.

And always, a dog.

In the early days I had a retriever mutt called Sweetie who had a massive stroke. Then a street tough dog named Sealee, I rescued from the streets in a council housing estate near Newcastle in England was my long-time travelling companion. Later, it was Snazzy, my Jack Russell from Nebraska who still shares my life in Australia.

Sometimes I would spring for a room at a Motel 6 for a hot shower and warm or cool night. But after 12 or 14 hours of driving a max speed of 55 on two-lane roads, Rand McNally open to the state of the day on the passenger seat, my usual bed was in the middle of nowhere.

A thick paperback Campgrounds for $5 or less, Western States  was my bible. To pay so little or nothing at all took me far from the paved roads, sometimes 20 miles down some gravelled state park road, up a mountainside or bumping along a dirt turn-off to a small collection of clearings in a remote ground, beside a cold tumbling river, beneath a tower of mountains, under a canopy of majestic pines.

If I did not sleep in my tent, because it was too late or I was too tired, I would tip down the back seat of the Vair to sleep.

This was before cell phones, before wireless anything was a pedestrian concept. I would curl up in my covers with the night air around me in the security that nobody in the world knew where I was.

Yes there were scrapes. You have no idea the scrapes. I drove old cars, replacing my ’65 with a ’67 Corvair. I was used to finding the GM mechanic in any town who knew those basic engines and could tweak a problem and get me back on the road. My parents were kind to me, allowing me use of a phone card to call home every few days to let them know where I was.

Came in handy the time my fuel-pump died near Bismark, North Dakota and I was lucky to have my first husband with me for company. We were gorgeously young and stupid, and offered a ride from a one-armed Minnesota trucker hauling cars. My Corvair was winched on his semi trailer, and we rode with him for two days, picking up more cars all the way through to Hinsdale, Illinois where he tipped us off and I waited for AAA to haul us to my parents’ home.

When I was young, I had little debt, steady work in between school and trips, incredible faith in my Corvair guru, Larry Claypool to heal my cars, and resilience. The latter quality tackled burned out brakes a few times until I mastered downshifting on 11% grades, snow-stacked logging roads where road signs had shifted in the frozen earth, risk of overheating climbing mountain passes through the Rockies and Cascades in my air-cooled car, and a vast collection of mechanical problems.

There was one memorable night I stupidly ignored the weather and risked myself in a section of Mark Twain National Forest in Missouri. The temperature dipped to four degrees Fahrenheit, and all I had was an army sleeping bag hogged by Sealee. I woke panicked and shaking uncontrollably, rattled my car awake under a skyful of stars and found an open general store/bait shop straight out of Deliverance where I lingered creepily to warm myself.

I had many favorite routes. I saw elk and pronghorn, huge porcupines. I was never molested or frightened by strange men. I was lucky.

The last adventures I had were just prior to my arrival in Australia in 2003. Both were trips to Forepaugh, Arizona. The first featured my grandest breakdown of all. It was after dark on 10 West, with my ’68 GMC pick-up totally breaking down pulling my Arab mare to a horse clinic. I ended up leaving her there, hitchhiking to a truck stop, then living in a trailer park in Deming with kind strangers and my mare tied to the trailer for two days while a massive Navajo man fixed my engine. That was an adventure.

It was a breakdown, but led to the journey that took me to the southern hemisphere, a grand adventure in itself.

But I miss those slow-driving, uncertain routes following the sun. Me and my wonderful cars that offered me so much. Endless roads and things to see. Ever-changing skies. Massive hanging moons. Storm fronts and tornadoes. Snow in summer. Desert and red rocks.

I must thank my parents who were reticent with their worry that probably flooded them, yet only expressed their love, and gave me the tools of independence to travel. I’m not done yet.

– The 1965 Corvair above was my first car, the photo taken on one of countless solo road trips I made throughout my 20s. This was along the great River Road, on the way to Red Wing, Minnesota and then onto the west.

You and I are cut from the same cloth, Michele. As you know I have done a lot of traveling……moving to the Bahamas in my late 20’s and helping run a yacht club there. I again took off on my late thirties and drove cross country by myself numerous times, looking for a new place to settle. My cars were better than yours and I always slept in a motel at night, but the same feeling that I was on my own and no one knew where I was, was there. I, too, was never accousted by any guy. I did have several men follow me in the New Mexico desert for many miles when we were the only ones on the road, but they eventually passes me. I finally settled down in my late forties and was mostly ready for the traditional life. But now and then I have the urge and do get on the road again…..albeit not usually alone.
Don’t give up on those adventures. There is usually a way to work them in with a “regular” life. Thanks for sharing this story….I really enjoyed it.