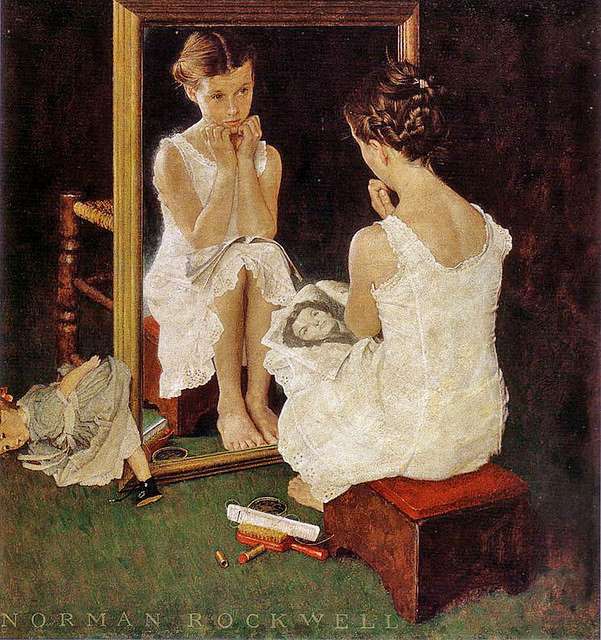 Tonight before heading to bed, I clicked on the BBC news and stumbled across this. It’s short. Please watch it.

In about three minutes, Em Ford deconstructs all it is to be the outside of a woman: beautiful, ugly, plain, disfigured, average, stunning.

As a teenager, fresh out of Catholic school and interested in everything, I tried makeup, and was terrible at it. I had foundation staining my shirts, eyeliner made my eyes water,  clumpy mascara, I lined my lips and filled them in with color, only to have the liner remain.

No good at all. Once I hit college, I gave it away.

It was just too much to maintain. I couldn’t be bothered carrying around the supplies, and I touch my face too often. Hair is bad enough, and I don’t take a lot of trouble with that, either.

As a teenager, I would spend a long time in front of the mirror trying to get it right. Not anymore.

Now I get up, take my shower, brush out my wet hair, crunch some hair tamer into it, clip it up to get a little lift in it as it dries, slip a hair band on my wrist for later, put on moisturizer, sometimes floss, brush my teeth, deodorant, dress. Done.

I know I’m a little funny-looking, and most of the time I appear tired, and it’s all right. I feel good about me, age and all.

But this young woman, who is blessed with a beauty I could have only dreamed of at her age is incredibly strong.

To be bare faced, she loses. If she makes herself up, she loses, if she strips off the paint, she loses.

Her beauty is a kind of burden, because it is the first thing most people will notice. Her acne makes it worse. And the comments even blame her, condemn her, for having a skin condition.

I would guess her harshest critics are women. Let’s face it, in the world of women, to gain earnest favor from other women, especially when you are that naturally lovely, is a pretty impressive achievement.

I wonder if she were not so beautiful, would her critics would change their tune. My gut feeling is the cruel comments about her acne would be worse, and the positive comments when she made herself up would be more effusive.

Why? Because we love to feel better about ourselves by shoring up the unattractive, and the unkind among us love to tear down the vulnerable.

It bugs me, but appearance does matter, and I think most of us do hang some of our ego on that particular hook.

Each day, we choose our outfit, pull on the underwear, run a brush or comb through our hair and have our own particular routine to leave the house.

We don’t tell each other often enough that we are beautiful. On our grimmest days, we don’t get the odd “Don’t you look nice today?”

We don’t take time, when we notice a brave new hairstyle, to say “That cut suits you.”

I agree with Em when she tells the reader “Believe in yourself, and never let anyone tell you’re not beautiful – not even yourself”, but I also believe that we may be beautiful inside, but often it is not the first thing we see about each other. We need to be observant and thoughtful of each other.

Thanks to Em Ford for this considered and powerful video.

I hope all those who took time to write such ugliness to Em will realize the irony of the title: You look disgusting.

I too , have never had much luck with the whole make-up/hair thing. Discouraged often, in the morning after the last bit of hair-spray settles, I say to myself “Sima, it isn’t how you look that matters, it’s how you act.”

Michèlereply
– In reply to: Sima Chatfield

How true is that. I always appreciate the actions, no matter what they are packaged in!