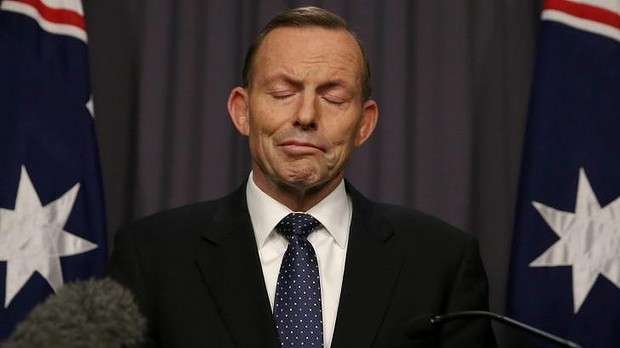 As the dialogue about same sex marriage in Australia is ramping up, I can’t help but notice once again how this nation’s Prime Minster, Tony Abbott,  fails as a leader.

The current debate on allowing people within the LGBTI community to marry if they are the same gender is causing fissures within the Liberal and National Coalition and energizing Labor, the Greens, and other parties.

In the midst of it all is Tony Abbott. Though his sister Christine Forster is a lesbian, with children, in a committed relationship, and ironically, a Liberal party Sydney councilor, Tony remains firm that the current government’s determination of marriage should remain between a man and a woman.

Here in Australia, we all know Abbott’s firm stand on this issue. Yet, I had a little bit of a full-body, astonished “What?” over something I heard when I was driving in to work on Wednesday.

ABC’s Michael Brissenden hosted the Prime Minster on the AM  program the morning after an unanticipated six hour debate within the Liberal party room meeting on same sex marriage.

I was astonished at something Tony said about the historical relevance of same sex marriage:

“It is a very personal subject. It’s a subject on which many people have very deep feelings.

“And I think the best way of resolving this, if we are to change – I say if we are to change – given that same sex marriage is something which has only very recently come into our intellectual and cultural parameters, given that it’s really only this generation that has ever thought of this – why not give it to the people? Given the fact that this is a very personal, very deeply held, quite contentious matter?”

To me, the question of leadership is embedded in this highlighted comment.

How can a leader of any country speak with such authority on an issue they know nothing about? How can Tony Abbott have any concept of the needs, dreams and yearnings of same sex couples now and in history?

Of course he cannot, and yet, in typical, bullish Abbott fashion, he speaks with utter disregard for the lives of those who don’t fall within the contours of his moral compass.

Even when he concedes there may be change afoot, this man seems unable to admit he might be wrong.

Climate change, Aboriginal and Torres Strait Islander rights, social welfare, asylum seekers, education, disability and health reform. In all areas, Tony Abbott will not waver from values reflected by conservative policy, rather than those reflected by an evolving national landscape, and an evolving world.

I feel little confidence in a leader who has no doubts.

On all these platforms, an inflexible, repetitive Tony Abbott has shown arrogant disregard for hard evidence and fact, little compassion for anything that cannot be verified as a return at the bottom of a balance sheet, because publicly, he shows no doubt.

He never seems to question that perhaps he could be wrong. It is a blind swagger now drawing global criticism on some of the most essential concerns of our world and the residents of this country.

We want our leaders to show leadership, but like any pack, or herd, or mob, to follow the head animal who shows blind certainty, who fails to test the wind, is a folly.

Every step must be gauged and tested. Leaders cannot afford to make a mistake, so caution and doubts, changes to the mapped route, might be the difference between life and death of their herd.

The best leaders are the ones who can navigate the dangers swiftly and safely. Decisions are made to make it through without leaving one behind. As humans, we’re all in that herd with needs that transcend any political ideology.

We need bendability. And that’s just not happening here.