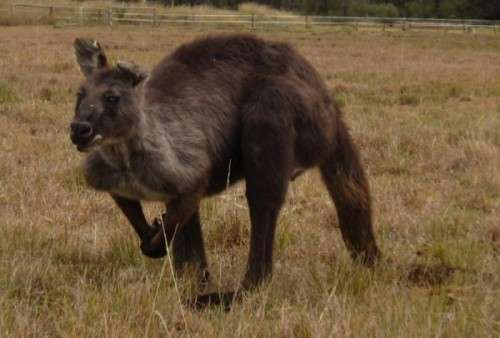 Early evening, and I was pulling up to our gate after my 45 minute drive home from work. I looked across the road and felt a little concerned. Bent Ear had found his way onto the property over the road.

Setting the scene, the last mile of my drive takes me weaving down a single gravel track, flanked with smooth barked apples and cypress pines. Onward from our gate is another mile and a half until the road dead ends with few neighbors. It’s a quiet spot. Fairly remote.

Bent Ear was an aged grey kangaroo. His ears looked a little like they had been run through a meat grinder, one very well-flopped, his coat was patchy. He was both deaf and blind enough that you could walk up to him and he would scent hunt the air around him to pinpoint where you were. He never got it quite right.

My husband Ross and I first met the old man shortly after we moved onto the place in April of 2011. The kangaroo would park himself in a shady spot in the paddock, nibbling away. Then he would take himself far up the property and stay up that way for a few days.

He got on with the horses who let him alone, and didn’t seem to trouble the mobs of other, more able, kangaroos and the lone wallabies who constantly move through our paddocks and bush.

There was something majestic about this animal who had clearly carried the scars of a number of battles with other big males, survived against the odds of wild dogs, rogue pig dogs, gun-happy farmers around us or opportunistic foxes.

For the shape he was in, it was a miracle he was still alive.

I felt a little nugget of pride to have this guy on our place. I knew his handicaps meant that he felt confident the land, and seeing him on the neighbor’s place worried me.

So I pulled the car in the gate and a way up the drive, then tried to figure how I was going to open the back gate of the neighbor’s property and encourage a blind, deaf kangaroo back onto our place.

I had a moment of concern that I was interfering with nature’s choices, but I had more concern about the neighbor. The gate is the back end of their property, but I felt like things might not go well if Bent Ear wandered too far onto that land.

First step was opening the other gate, and getting Bent Ear on the right side of it. I was worried I’d panic the fellow, so I picked up a long stick and guide him out to the road.

He took it well. Initially Bent Ear was a little startled when I tapped him on the side with the stick, but after a few false starts, I encouraged him to slowly lollop past the gate post. Picture a very geriatric, giant rabbit moving in slow motion.

Once out the gate, I was in a quandary. The twenty feet between the driveways suddenly seemed like a very large area with the road stretching out either way. Bent Ear might end up heading anywhere.

So this thing happened. In the past, I had sat in the grass with Bent Ear taking photos and sitting quietly, ran across him in the paddocks and watched him for a while. Once he got a little testy and stood up to his full five feet, made his weird kangaroo snorty sound and displayed his weenie.

At that time I said, “Steady buddy. We’ve moving on.”

This time I reached out.

With the stick on one side and a little pressure from my hand, I got Bent Ear to take a step. “That worked,” I thought. And I did it again, keeping an eye on his very long claws.

Remember, I was wearing work clothes, stacked heels and wobbled a little. Not the best kangaroo-pushing clothes, but all that seems insignificant when I got the man moving.

After a couple of yards, I lay the stick down and just pushed him. It was kind of like pushing an uncooperative, fuzzy drunk but at least we were heading in the right direction. He was soft, and I kept wondering at the fact he didn’t mind being touched.

By the time we made it into our gate and onto the grass, I still hadn’t stopped marvelling at that whole thing. I closed our gate and walked back to the car.

As I drove down to the house, I saw Bent Ear in my rear view mirror, and I felt like I had deserted this blind, deaf old animal. He crouched, frozen in a sort of stasis, but at least he was on the right side of the gate. “Get a grip,” I thought. “He’s a wild animal.”

So Bent Ear hung out at that end of the paddock for a while. It was one of his favorite places and I saw him a several times in the next weeks. Then he was gone.

It wasn’t unusual. He would disappear for weeks at a time, but then one day, his dark shape would be just visible above the grassline. This time seemed a little different. A little more hollow.

The dogs and I ran across a roo carcass in the creek, but it seemed too small and too decomposed to be Bent Ear, though when an animal dries out they seem to shrink. Still, I reported it at the house. Ross wasn’t surprised, and neither was I. If it was Bent Ear. I still harbored some doubts.

They were confirmed one afternoon. Ross had driven up the road to have a few words with that neighbor who owned the land Bent Ear stumbled on to. Ross is a pragmatist, but when it comes to animal welfare, he has a strong bias in favor of the beast.

“Well, I know what happened to Bent Ear,” he said when he came into the house. Turns out, the neighbor ran across the old fellow on his property, shot him and fed him to his dogs.

Ross said the neighbor thought he was putting the kangaroo out of his misery.

Maybe it is just me, but running across that carcass in the creek seemed sad, but just. It is how an old kangaroo should end its life with the calls of Currawongs and Cockatoos echoing along with the wind through the trees above. Fairy Wrens, Silver Eyes and Fire Tails cocking an eye at the old body. Then a silence.

But a rude lights out for Bent Ear, who could navigate around his territory, find food and water with very limited senses, felt like a tragedy. He earned a more gracious death.

Poor old guy. Thank you for sharing him with us. Would have been a better ending for him to just fall asleep in the shade one afternoon and keep going.

adminreply
– In reply to: Michelle L

I agree Michelle. He was a pretty special character.

Hi Michele,
I had the pleasure of auditing Ross at a clinic in Iowa this year and he mentioned your writing and web site. I have been reading a little bit here and there as I am running from one project to another and I have really enjoyed your writing.

Old Bent Ear….I know everyone views ‘humane’ in a different light, but I am of the same thoughts you are. It sounded like he was getting around fine in spite of his age and old man ailments and I would have let him do his thing….natures way (unless he was physically hurt – I have not learned that part of ‘natures way’ yet). Thank you so much for sharing his story. What a blessing you both were to each other.

Thank you again! I am going to let this story soak in before I move on to another…

adminreply
– In reply to: Karen Cooper

I’m glad you had time to see Ross in Iowa, Karen. And I do appreciate your post.
We did have a kind of nature’s way three years ago when my neighbor’s dogs (another neighbor) scared a wallaby into our fence and caused him to break his hip and leg. None of that was natural, but a friend up the road had a rifle and put the poor little guy out of his misery. He was far too damaged to be rehabilitated and it was very upsetting. What was annoying was the neighbor bothered to come and tell us this had happened at 7.30am on a Sunday morning, but couldn’t be bothered to stay while we waited for the guy to show up with his gun. Typical.
Thank you so much for stopping by and come back any time!